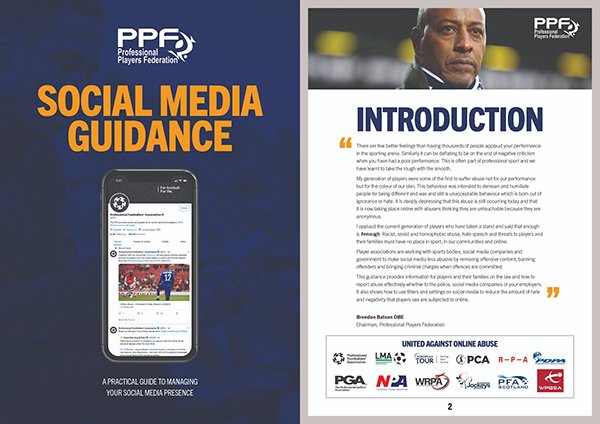 The Professional Players Federation (PPF) has released a set of Social Media Guidance for players and associations to help them manage and report social media abuse.   The twelve player associations that form the PPF are also reiterating their call for more action to be taken to protect players from the vile online abuse they receive each day.

“Earlier this week, the members had a constructive meeting with the Minister for Sport, Nigel Huddleston MP.  We welcome the commitments from this Government to designate online abuse of players as a priority harm within the Online Safety Bill.  We are providing just a few examples of the type of unacceptable abuse professional sportspeople receive in order to highlight why it is imperative that they are protected within the Online Safety Bill. “

The PPF social media guidance has been produced to advise players on how best to report social media abuse, how they can seek support and also manage their social media to protect both themselves and their families.

“These guidelines are just one of the many ways that the PPF and linked players’ associations are supporting their members in this area. However, we firmly believe that the key responsibility lies with social media companies and the Government to do more to protect players. The Online Safety Bill will need to address players concerns and be amended to reflect that racist and discriminatory abuse will be designated a priority harm in the legislation.”

The sporting world has already come together to protest in a social media boycott and now the PPF is calling for the following considerations to be met by the government when publishing its upcoming Online Safety Bill:

·       Online abuse of players needs to be designated a priority harm within the Online Safety Bill.

·       Discriminatory abuse and threats of violence must carry the same legal weight online as if it was said in person.

·       Social media companies need to be held accountable for illegal abuse on their platforms. We support measures for significant fines if companies fail in this proposed duty of care.

·       Emojis are increasingly being used as a form of abuse and need to be recognised as having the potential for abuse within any legislation.

·       People who break the law online should expect to be held accountable – through criminal charges and not just bans from social media.

·       It is essential that individuals are able to make complaints to Ofcom and under any new legislation. It is not acceptable to only permit “super complaints” as currently proposed.

·       Any new law must not undermine existing recourse to the law. It would not be acceptable if the new law reduced the willingness of police forces and the CPS to prosecute online harms due to the regulation by Ofcom.

The PPF also reiterates its call for social media companies to take the following actions:

“This is an issue which affects all sports and one that the PPF is focusing on during the passage of the Online Safety Bill which is before Parliament this year.  Professional athletes and their families are subject to a range of sickening online abuse including race, religion, sex and sexual orientation. In addition, a worrying number receive threats of violence and people wishing serious illness upon athletes and their families. We trust that the Government will amend the draft Bill to reflect the Prime Ministers promise that online racist abuse will be designated a priority harm.

·       Player associations continue to provide legal advice and emotional wellbeing support for their members who receive online abuse.  Other activities include:

o   The PFA has produced a set of guidelines and advice for their members suffering abuse.

o   The PJA is co-funding a short film ‘The Fall’ which focuses on jockeys’ mental health and the impact of social media abuse.

o   The PCA have introduced a series of social media abuse workshops.

o   The PDPA’s ThinkDARTS campaign provides guidance to members on how to report social media abuse and seek support.

o   The RPA delivers social media education, and support to players, in conjunction with the B5 Consultancy as part of the RPA Academy Induction Day and via the RPA Gain Line programme.

·       English football, including the PFA and LMA, has created a list of proposals to strengthen the draft Online Harms Bill.