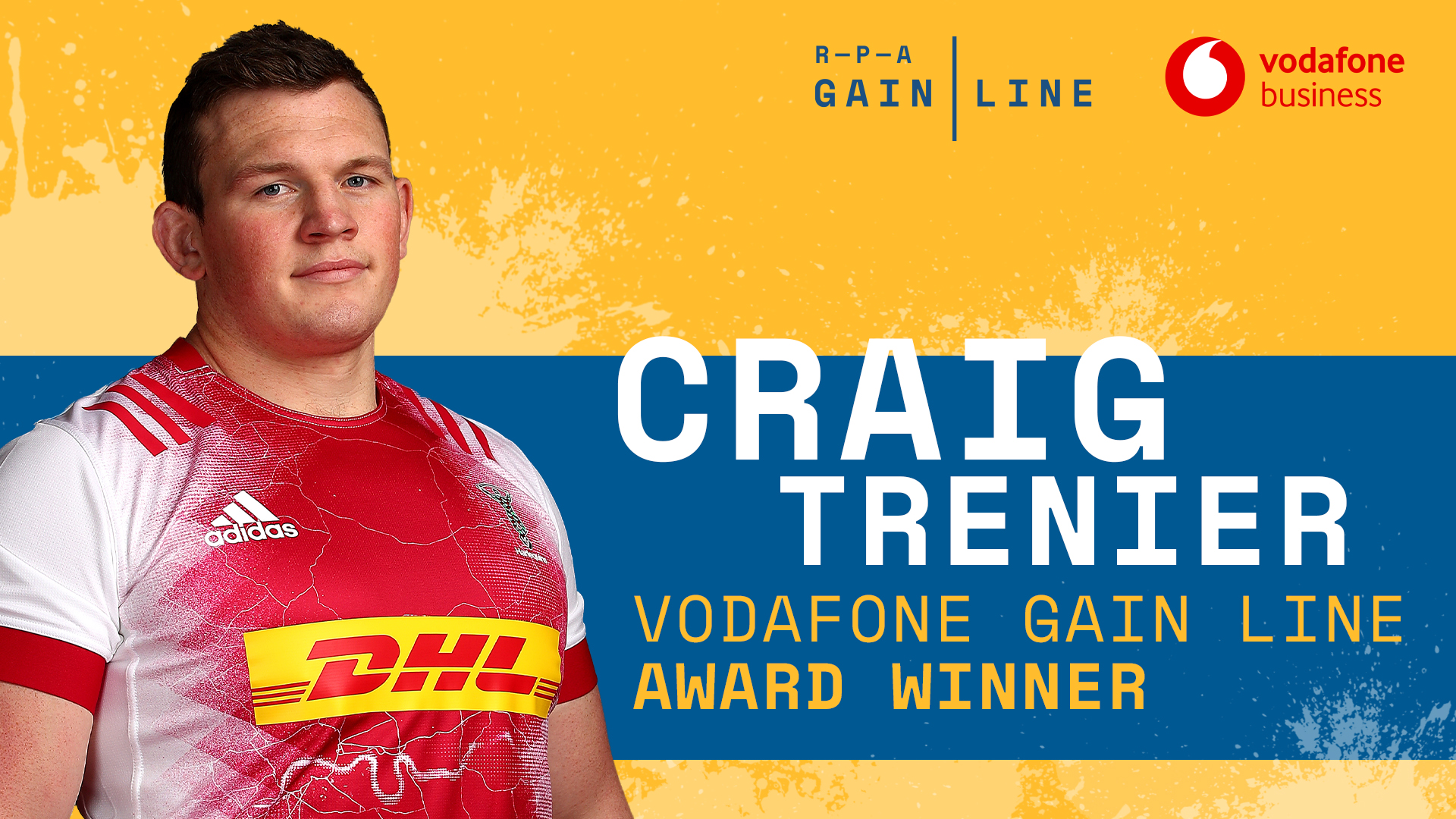 The Rugby Players Association (RPA) is delighted to announce Craig Trenier as the final recipient of this year's Vodafone Gain Line Award. The Harlequins' forward started his professional career in Ireland at Ulster, before spells in the Championship for both Richmond and Ealing Trailfinders, as well as for Ireland U20s. Now at Premiership club Harlequins, the 26-year-old who has been recently plagued with injuries, has not let this stop him from making waves off the pitch.

After leaving Belfast in 2017, Trenier joined Richmond. Through contacts at the club, the tighthead prop found a role in recruitment. Following just eight months at a large recruitment agency, Trenier felt confident in taking on a solo venture, and with the help of some advisors at the club, the prop took the plunge in setting up his own business.

Starting in his living room in Waterloo, London, Trenier's company, Albert Bow, moved swiftly to a hot desk in a WeWork space following his first major deal. Three years on, Albert Bow now employs a 10-person strong team that specialises in technology roles. His business partner Harry Davies, a former Richmond teammate, who came on board in the early stages of Albert Bow, plays a key role in the day-to-day running of the business, ensuring Trenier can continue to play at the highest level. While Trenier juggles a full-time professional rugby contract with running his business, he still finds time to help his fellow rugby players.

Trenier and Davies are opening their doors to fellow players who are keen to learn and experience work in the real world. From his teammates at Ealing Trailfinders gaining work experience at the company or Harlequins Academy players observing how the company works on a day to day basis, Trenier is providing invaluable experiences for players around him. His meteoric rise in the recruitment industry, while still playing at the top level illustrates that Trenier is an incredibly worthy winner of the Vodafone Gain Line Award.

On winning the award, Trenier said: "For me, having Professional rugby and a career off the pitch (Albert Bow) provides me with balance and an increased sense of professional security and stability.  Albert Bow has always provided a welcome mental outlet, especially over the last 12 months while I have been recovering from injury.  I look forward to continuing my professional rugby career alongside growing Albert Bow with my business partner Harry and our great team."

Trenier's RPA Senior Development Manager, Caroline Humpherson, said: "Craig has an incredible self-drive and ambition, which is evident through his success of setting up technology recruitment company Albert Bow. He has had to manage a challenging period of injury recently but is a brilliant role model for players in recognising the importance of having a balance and focus away from rugby.

"What also makes Craig stand out as such a worthy winner of the Gain Line Award is his desire to support the younger generation of players, and encourage them to engage in personal development activity, ensuring they feel confident in their identity in addition to being a rugby player. He is a stand out individual and deserves huge recognition for the efforts he has put into setting up a business so it’s brilliant to see him be presented with this Gain Line Award."