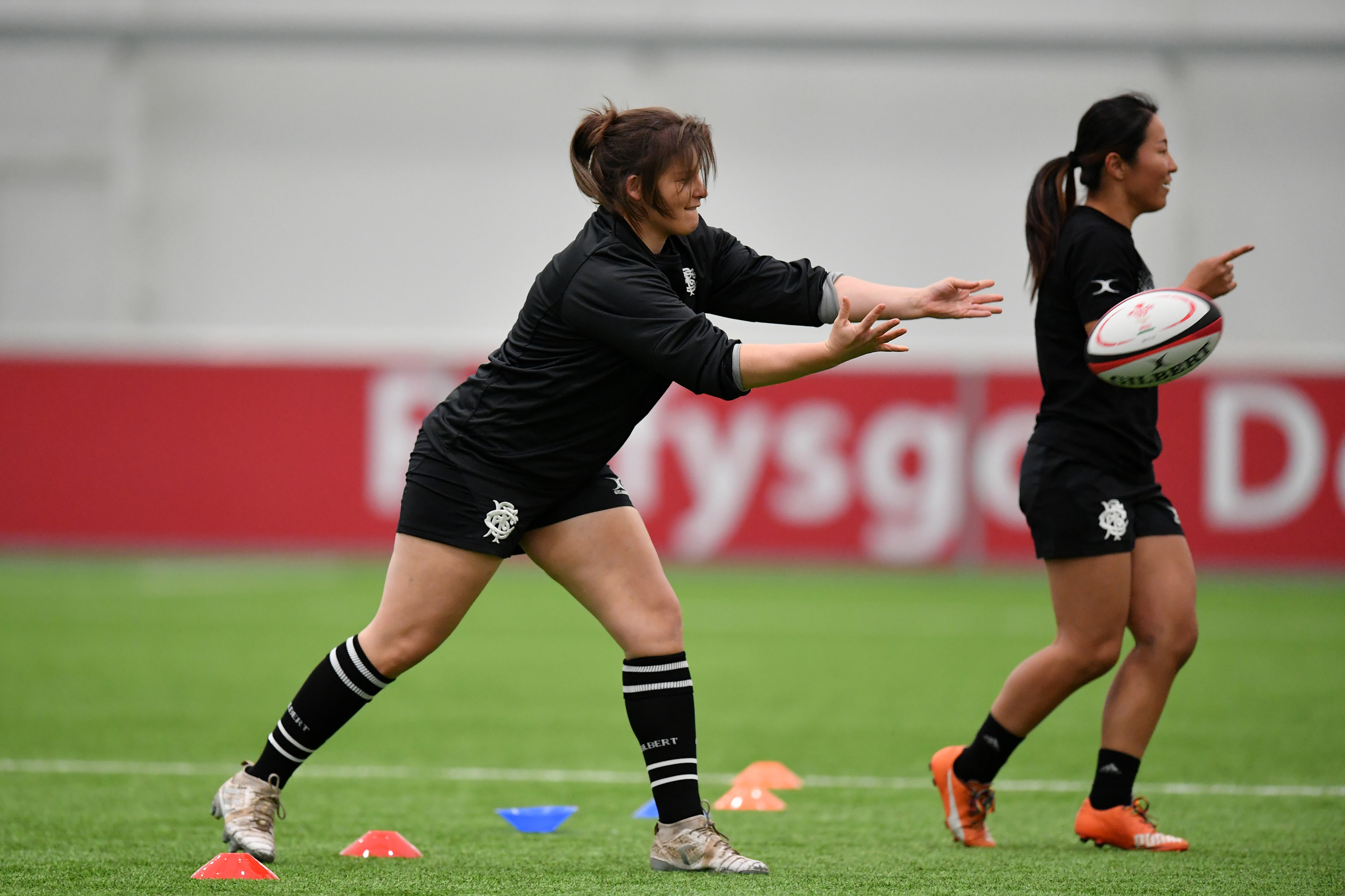 To continue our celebration of Pride Month 2021, former Bristol Women and England prop Sasha Acheson talks to the RPA about her new role as Bristol Bisons Head Coach.

How did the new appointment come about?

It was actually quite serendipitous. My partner and I moved house last year on to a new street in Bristol. I am a firefighter and have my own gas engineering business as well. There were a couple of guys who lived up the road and they had something go wrong with their gas fireplace. I went round and after sorting their fireplace problem,  they showed me the gym in their garden and it had a rainbow rugby ball in it. I asked if they played, and after various other rugby related chat, they asked if I played; One of my coworkers jumped in and said I had played for England, and then one of the guys actually recognised me from the Baas Baas game they had watched when my shirt got taken off mid game, what a thing to remember!

They asked if I coached at all, to which I shared my experience of working in community coaching and currently coaching the England Fire service. They told me Bristol Bisons were recruiting for a head coach and I should come down and have a look. They already had a few other coaches in the mix, but I went down and shared my thoughts on how they trained and what I thought they could improve on. I introduced various rules and they started playing a completely different style of rugby and it looked amazing. They were like sponges and totally absorbed what I said. I went for the next few weeks, mainly because I was enjoying it. Off the back of that I had an interview with the manager, and I said I was keen, which meant the committee had to vote and I got the position unanimously.

How is the club set up for the season ahead?

This season we are entering two teams into the IGR (International Gay Rugby) league, because the Bisons have 70 players keen to play which is incredible. I always play best with positive coaching and being empowered and having belief instilled in you. So I don’t want the 1sts to feel more important than the 2nds. I know sometimes people use the terminology of starters and finishers, which I have mixed views on. But I think in terms of 1st and 2nd team - there are different people wanting different experiences out of this game, some people want to play competitively, some want to play for fun and some want both. It’s more the pathway rather than a reflection of your ability.

Why do you think it is so important for clubs like this to exist?

Being completely truthful before this experience I wasn’t fully clued up on the IGR league . I knew that there was a Kings Cross steelers outfit but I didn’t know the IGR world was as wide reaching as it is, so this has been an eye opener for me too. All of our players’ stories have a common denominator in which they want a safe space, they want to meet other people and be part of a community and play rugby. They are all incredible athletes, but they want a safe, non judgemental environment, where they can learn, develop and play rugby. In my opinion this is seen particularly in men’s sport because there is such a perception of stereotype of what being masculine is, and rugby has in times gone by, been perceived as being such a stereotypically masculine sport. Some of our players have experienced feelings of not being welcome in traditional rugby spaces. Our players represent the straight and LGBTQ community, but they have experienced environments where they have been pushed out or they can’t express themselves when being part of their old sports teams. Some of them played rugby as schoolboys and loved it, but didn’t continue because they were gay or didn’t fit a certain rugby percieved mould. They felt they didn’t belong or have a right to play the sport. An introduction of an IGR team creates a completely different avenue where people can express themselves and are empowered to be whoever they are, unapologetically.

Do you think it is the same in Women’s rugby?

Womens rugby is very inclusive. Women historically never played rugby because it was a mens sport, just as women historically weren't Firefighters or Gas Engineers, but now they are. The world is changing, and we all celebrate and come together to support that change wholeheartedly. There isn't a divide in womens rugby, your sexuality bares no consequence, we all are celebrated and encourage one another to play the sport we love together. I suppose that's been my privilege, I have always been supported and encouraged to do what I love and grow up without divisive boundaries. I only learnt as an adult that certain interests were more for 'boys' or 'girls', but I have never lived that stereotype. I have a twin brother, so we both were given the same opportunities, and we have both taken very different paths. That's just our personalities. I have played rugby since I was in primary school, and contact rugby since I was 11 years old. It has been the cornerstone of my life, and I'm so grateful for the people I have met, the levels I have played at, and the education I have received on morals, character and work ethic. I'm so grateful I have lived in a time where womens rugby was so accessible to me and is now the fastest growing sport on the planet.

Do you think that’s why these clubs are so vital because rugby is being made available to everyone and anyone?

Definitely. I have always found rugby super accepting. My experience of rugby is very different to some of the players at Bristol Bisons and that has been so apparent and really eye-opening. My experiences have been very positive and very inclusive. Whereas I have heard stories from players where they have been asked to leave teams, or made to feel like they don't belong, purely based on their sexuality. One story that comes to mind is a player was made to feel he could not shower after rugby matches, and after being at the club for 2 months, was told that this club isn't the club for him. He was the only openly gay player on that team, and was segregated because of it. Their experience of rugby has involved hiding parts of who they are to fit in and that’s not what sport is about. The thing that is so great about women’s rugby is we are coming at it from a feminist point of view, we can express all parts of ourselves, and we are welcomed regardless of absolutely anything. We can celebrate being these strong empowered women playing sport or we don’t even need to think about it, we just played because we loved it and that is enough and should be for everyone, and should translate into the mens game too, regardless of sexuality.

This experience is not exclusive to the LGBTQ players who represent Bristol Bisons, the players who identify as straight for the Bisons have witnessed, when playing for non-IGR teams, behaviours which are non-inclusive. They don’t want to play rugby in an environment where everyone can’t be accepted and celebrated.

What do you hope to achieve in your new appointment?

I think the biggest thing for me is that when I first joined the Bisons, I knew I wanted to make them feel empowered. I want to impart the confidence that coaches I have had through my career gave to me. I want to give them the tools to be able to play rugby with flare and express themselves as athletes because that is when they are at their best. They are all very passionate about rugby and a solid, positive team who are gaining knowledge on structure, plays and a wider understanding of the game. The biggest thing comes from them then utilising that toolbox of skills with confidence in a game situation. I want them to play with unwavering confidence on the pitch and carry that through into their day to day lives as well.

Are you excited to see what you are going to learn in your new role?

Absolutely. I am now part of a community that I didn’t know I needed in my life. They are such an awesome bunch of guys. The biggest thing that I said when I took the role of being head coach is I don’t want to be their head teacher. I’m here with you and we all here to do this as one, together - you trust me, and I trust you. I am already getting so much fulfillment and enjoyment because I’ve played rugby my whole life and due to covid it didn’t feel like such a brutal blow when I finally stopped because rugby wasn’t so prevalent. For a period, I questioned whether I wanted to be part of rugby again, but because it was such a big part of my life for so long there was a big hole left which I’ve tried filling with other stuff which hasn’t worked.  To now, having various coaching roles, and being the Head Coach of 70 amazing guys; that’s something that’s in a completely different realm to anything I have done before and I am super excited for the season ahead.