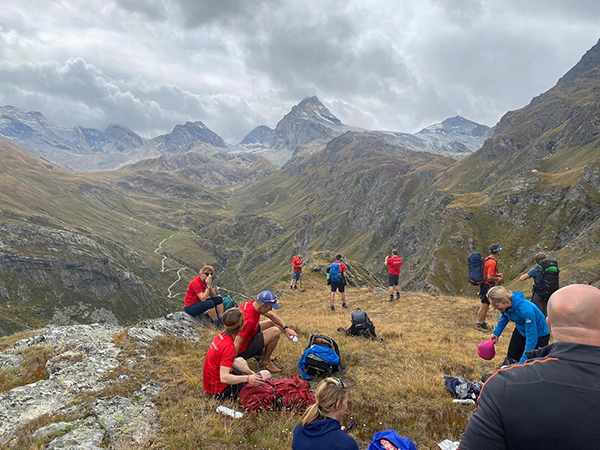 Arriving at Valley Rhemes Notre Dam, the opening to the valley and trails was mind blowingly beautiful. The moody skies only adding to the drama.

Underway, with the Alps legend that is Francois-Eric Cormier, soon the phrases “off piste!” and “Up! Up! Up!” resonated across the valley!

Waterfalls, lakes and 4,000m peaks line the valley, the scale taking us all aback as we wind up the sides of the foothills, the air getting thinner.

Over Alpe Goletta into a gulley as we hit the loose scree. Up and over; in the distance, Lago di Goletta comes in to view. A vast, glacial lake still supplied by the Goletta Glacier. We’re reminded how far the glacier has receded; heart breaking and worrying.

After a stop for the first of the two day’s sandwiches, we head for Rifugio Benevolo. The rain starts making the trail slick and decidedly dicey. Quite glad even Francois, with his brolly, wasn’t fancying ‘off piste’!

The refuge comes into sight, down we go. Soon we can hear the cow bells as a Mammut squeaks on the hillside. Hot and very damp, bags are dumped, and a beer is ordered.

Dinner is a massive bowl of pasta followed by beef and potatoes.

Bedtime! “Bonjour! Bonjour!” will be heard all round the refuge at 6.30am. 25% less oxygen than at sea level.

My alarm startles me; thinking I had left it set at an ungodly hour to catch a flight, I panic to turn it off so as not to suffer the wrath of the dorm. As I push the button, the door opens followed by “Bonjour! Bonjour!”. Time to get up then.  My watch tells me I managed two hours.

Bags are packed and off downstairs for a bowl of coffee, some muesli and the dry Italian bread, layered in as much Nutella as I can pile on it.

I’m ready early and itching to go as I wander around the hut, admiring the sunrise. The group filters down, Francois and Ben explain the day’s plan and we set off.

It’s at this point Francois suggests we’re taking an old route; a ‘highway’. Excitement of a paved, flat path soon fades with “Up! Up! Up!”. As we traverse the ridge, the sun peaks over the top for the first time; the warmth providing a massive lift. “Stop! Shhhh!”. A Chamois is grazing on the ridge. We watch for a while until we continue for the first stop off in the bowl for some caramel wafers and to change into shorts.

Punta Basei is pointed out, a rock formation of 60m prominence perched atop the mountains in the distance. The traverse continues up to Col du Basei. It’s at this point I get the first glimpse of Gran Paradiso I’d climbed last year. All the emotions come back as I take time to take it all in. A two-day old chicken sandwich is unwrapped as I find a rock to sit on; I can’t believe how lucky I am to be witnessing this majesty.

Lunch consumed, we leave the bags and begin the ascent to Punta Basei. Ropes are mentioned, adding a degree of nervousness to the group. We get to the summit scramble, wires and pitons come in to view as the vertical and exposed climb to the cross on the summit becomes apparent. First few up as steadily, all make it. Some whisky is consumed, and smiles beam all round…just to get back down now.

Francois sets up a belay point and the group begin descending. I’m busy snapping photos when I realise people are departing and I wonder if I could just stay up there on my own for 5 minutes. It’s bliss.

Bags retrieved, we continue across the valley firstly to Lago fi Fond amongst the boulder field and loose shale. It’s not an easy descent. A welcome break comes as Clarkey picks up some rocks to skim.

More boulder hopping and we get to the ‘beach’ at Laghi di Fond. Clarkey, clearly buoyed by the skimming (managed an 8’er) takes off his shoes and wades in, the clay bed making it hard to stand. He’s soon joined by ‘Tor who undeterred by her unexpected swim yesterday, reminds us of her love for cold water swimming and in she goes. Clarkey soon follows for a couple of minutes. Rather them than me!

With all dried off, we depart. Up over the ridge we walked yesterday which is this time dry, with views far reaching to match. The waterfall that was merely a trickle, now raging up to our left.

It soon becomes apparent, there’s a gorge to cross. Francois scopes a suitable crossing point. The step and gap are small but the drop to the raging torrent below, adds peril and concern for the group. Before I’ve given it a thought (best way!), I’m across as the rest of the group follow. It’s a big mental battle for some, but we all make it. It’s a special thing about the mountains; the closeness, support and willingness to succeed as one.

Last of the challenges, no one else seen all day again and cow bells can soon be heard. Those Marmots are still screaming as they see our presence. We arrive back, and those beautiful people of CHX have laid on beers for the group. Soon, it’s time for dinner again and the group widely acknowledged we’re not fans of Pollenta.

Benevolo Hut to Truc de Tsanteleina (2,640m) and back to the cars.

The Hut Guardian made a mistake last night; he told everyone they accept cards (unheard of!) so we weren’t curtailed by the few actual Euros we had between us…which meant wine.

I was already awake when “Bonjour! Bonjour!” came through the door at 6.30am. Feeling quite fresh and thankful Francois enforced the curfew, sending us to bed at 10pm.

Another bowl of coffee, as much muesli as I could fit in and strip the rooms ready to leave. The drying room remained full of the items we would get away with not taking this morning.

The morning’s objective was a ridge in the distance. It looked foreboding and tricky to access, no surprise there!

As the weary bodies were “Restarted!!! Brrrrm! Brrrrm!”, we made our way into the valley again, with the now familiar and comforting cow bells providing the soundtrack.

Following the river and gulley we had crossed yesterday; we reach the base of the ridge. It’s steep. Many zigzags are made on wet grass as the morning sun breaks over the mountains to the East.

On top, a quick breather is taken, and the scramble pointed out. Love it! Many don’t. But, again, the group pulls together and conquers the exposed arête to the plateau above. Feeling weirdly energetic I bounce around the side and clatter the poles I’m holding, nearly giving Ellie a heart attack. My bad.

The plateau is something else. Bathed in morning sun, the photo opportunities and views of the valley couldn’t fail to make us all smile broadly.

Once all photos are taken and a mid-morning snack is consumed, it’s time to turn our back on the valley, and head for lunch at Refugio Benevolo. A pang of sadness washes over me as I descend the other side of the ridge.

The walk to the Hut is ON piste. Mind’s all blown, we marvel at this Game of Thrones-esque landscape we now find ourselves part of with high slabs either side and a ridge ascending up to our left. Another group is seen, the first in days!

I’m feeling fantastic at this point. My legs feel great, no knee pain and I rock hop down the valley like a much younger me. Didn’t know I’d be able to do that again.

Back to the refuge for some lunch. Having been mis-sold the lunch menu (case pending!); we all settle on various variations of Polenta. I opt for smothering mine in cheese in the hope it makes it palatable; negative.

Eventually fond farewells are said, bags are loaded with all the items we’d left festering in the drying room first thing and off we go.

No sooner than we’ve seen the path to the car park, more “off piste” is announced! But, it’s at least confirmed as the shortest route to the car park.

We chat merrily, putting the world to rights as the waterfalls rush over the edges of the cliffs above, and the valley continues to be ever changing with each step. Time is taken to look back. It’s such an epic place.

An hour and a half later, we arrive at the cars. This is a special moment as all the group arrive back. What an achievement! What a group of people. All that’s left is the drive back to Chamonix for celebrations.

Showered and packed, the evening meal in the chalet is prepared. We sit down and regale tales of bravery as “Up! Up! Up!” is heard when someone’s weary legs attempt to propel them up the stairs. Damian Hopley leads with thanking everyone as the group, safe in the company of those around them, tell all how much this trip has meant to them, and what a profoundly positive effect it has. Ellie notes we’ve raised £15,000 for Restart at that point in time.

Another incredible trip. Hard earned views, days spent with the most amazing humans and tens of thousands raised for an unsung charity who do amazing work but are sadly, too often overlooked. 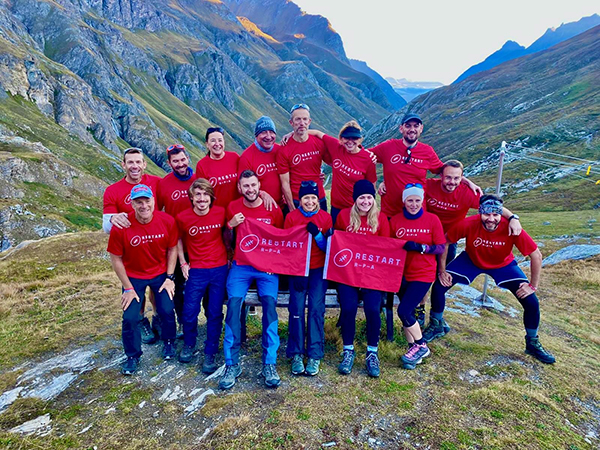 From the 15th – 19th September 2021, a team of 11 supporters and staff took to Gran Paradiso National Park in Italy to tackle Restart’s Annual Alpine ...

Click here to read the full Restart Round Up Volume 2

Including interviews from Restart Trustee James Haskell, The RPA's Diversity and Inclusion Cons... 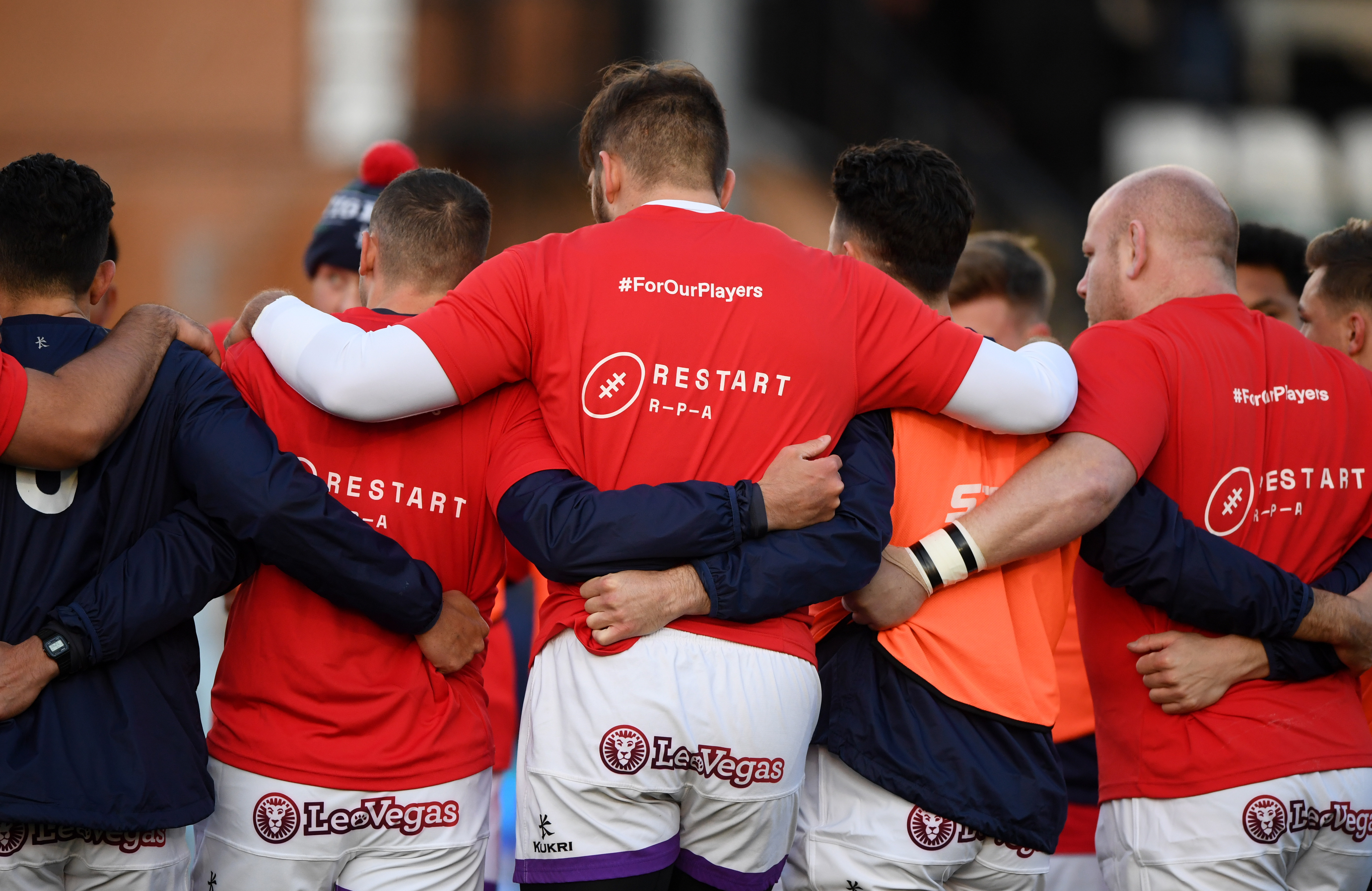 The Rugby Players’ Association (RPA) is the representative body and collective voice of prof...