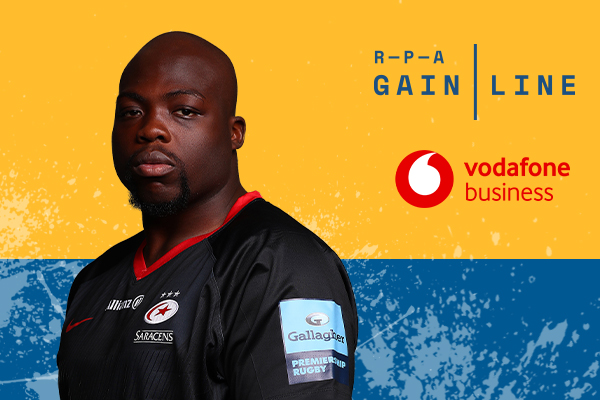 The Rugby Players Association is delighted to announce Josh Ibuanokpe as the worthy recipient of this season's first Vodafone Gain Line Award. The 25-year-old prop started his professional rugby career at Harlequins Academy, before making his first start against Saracens in the Anglo-Welsh Cup, scoring the winning try. In 2019 the Tighthead made the move across London to join Saracens, where he is currently honing his front-row craft.

Off the field, Ibuanokpe has shown a consistent desire to develop as a person alongside his professional rugby career, starting with a Physics degree from Bristol University while in the Senior Academy at Quins. He then went on to enrol in a Maths Masters degree, part-time, at the Open University.

During his time at Harlequins, Ibuanokpe developed a keen interest in cooking and hosting his friends to share his love for chicken wings. Upon moving to Saracens he saw his chicken wing themed dinners as a great way to get to know his new teammates, which then fueled the fire to see where else he could share his culinary creations.

Using his initiative, the prop headed out into Hertfordshire to seek out venues and opportunities to sell his chicken wings, founding and running a new business aptly named WingTing. With four delicious variations, Ibuanokpe landed residencies at George Street Canteen in St Albans and The Goode Kitchen in Harpenden.

Even in the early stages of his new business venture, Ibuanokpe wanted to give back to his community and developed a partnership with his local foodbank Southwark. In the first lockdown the Peckham native raised £800 for the Southwark foodbank and continues to be of great help to the organisation, most recently deciding to donate a portion of his Gain Line Award funding to aid the foodbank.

On winning the award, Ibuanokpe said:

"Thanks to the RPA for awarding me the first Vodafone Gain Line Award of the season, I feel very blessed to be considered for such an illustrious award. Making wings for friends and teammates has been a passion of mine for many years now but only just began making it commercial through WingTing and I am proud of how far it’s come. I want to thank my RPA Development Manager Ben McGregor for all his help and support he’s given me throughout my career and to all the boys who have eaten with me. I’m really looking forward to the future and expanding WingTing on an even wider scale.”

"I’m delighted Josh has been recognised for his work away from rugby. He is an excellent role model for all players. I’ve been privileged to work with Josh at both Harlequins and now Saracens. He is an intelligent and generous person who has always been proactive and willing to learn new things away from the rugby field, from becoming a chef to learning coding to design a new business website.

What makes Josh’s achievements even more significant is that he has faced extremely challenging circumstances during his career, including dislocating his neck. I admire his mindset and strength of character just as much as his playing and academic talents.

It’s exciting to see how passionate Josh is about bringing people together with great food – his WingTing journey has only just begun!"

Anne Sheehan, Business Director, Vodafone UK, said: “Josh’s drive and determination is inspirational and it is great to see his passion for giving back to his community. We hope this bursary will assist Josh in developing his business further and we look forward to supporting others over the coming years.”