Katy Daley-McLean: The Next Chapter 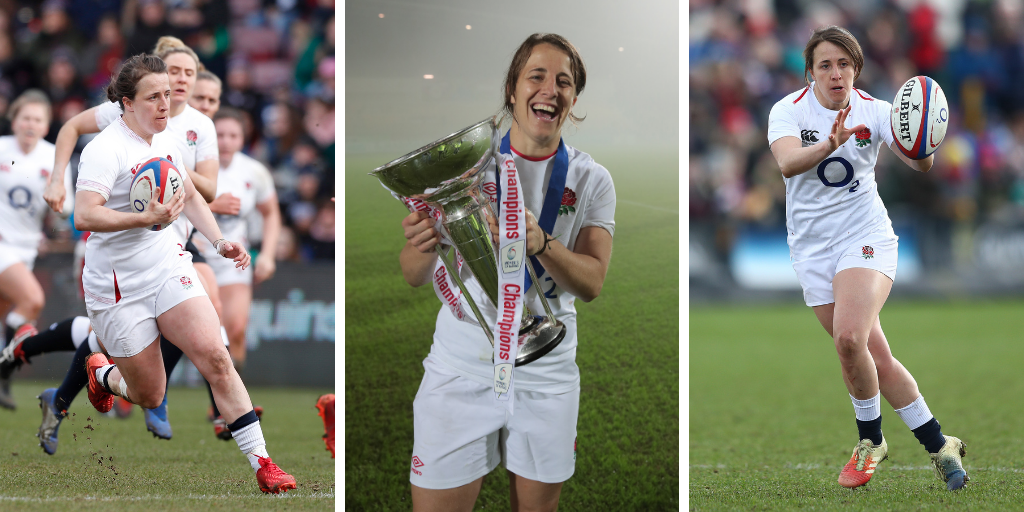 This weekend will mark the first Six Nations in more than a decade which will not involve England fly-half legend Katy Daley-McLean. Hanging up her international boots in December last year, Katy is now looking ahead to the next chapter. To wrap up our Women’s History Month series, the RPA caught up with Katy to discuss her new coaching role, how Women's rugby has developed and her thoughts on being a spectator at this year's tournament.

You left the international stage in January of this year, how has that adjustment been?
It’s been easier than I thought it would be. With the Six Nations being postponed, there’s been no international rugby, so this next month will be interesting. As you get further away from a decision you become more comfortable with it. Time changes everything and I am in a good routine here at Sale Sharks, with a big chunk of club game, therefore my priorities shifted quite quickly from international to club focus.

How have your priorities changed since leaving the international game?
I definitely don’t run as much as I used to. It has mainly been about getting more of a balance between home and work. Playing for England took up the majority of my time and now I have the opportunity to focus on me and the little one rather than questioning whether I have done the right amount of training or if I need to do another session. Now I can just focus on settling into retired life a little bit more and figuring out what that looks like for me.

In terms of next steps in your career, what areas are you looking into?
I am starting to work on my coaching elements and my delivery at Sale Sharks. Previously I was massively focused on myself as an athlete and not as worried about my future. Now I sit down in the changing room and look at my areas of interest and ask: ‘where do I see myself going in the short term but also the next 5-6 years. What are the things I want to experience and achieve?' Coaching is very much like mastering an art and that excites me to have an opportunity to start at the beginning of something. To learn, absorb and change my view of the game from a playing perspective to the coaching side. The opportunity to fail is great because there are so many great coaches at Sharks, from Juniors all the way to Men’s Premiership. To be able to learn and listen across all those levels is invaluable.

Following your 13-year international career, what have been the key changes in the women’s game from your perspective?
How much the skill level has improved is massive. When I first started in comparison to now, its incredible to see how skillful the girls are. The kicking game has also come a long way. Back at the beginning of my career there would perhaps be one or two kickers in the international team if you were lucky, whereas now it is expected that the majority of your backline will have some kicking experience. Even in terms of coverage and exposure it has improved immensely. I had my first cap in 2007 in front of 150 people and a lot of them were friends and family. My final game with crowds for England was in front of more than 10,000 fans at the Stoop, which was our home record I think. That level of growth is fantastic.

We see the likes of Emily Scarratt, Nolli Waterman and Maggie Alphonsi all now becoming familiar faces on our TV screens, how important is it for this exposure to continue and expand?
It’s so important to show women have a voice. We are so used to hearing that the only people who are allowed to talk about rugby are men because they are apparently the only ones who know about it. To have the likes of Maggie, Nolli and Emily, all those lead females, to have a voice and to rebuff the idea that just because they’re women it doesn’t mean they don’t know what they are talking about. It is about making the Red Roses now really accessible to young girls. I look back at who I aspired to be and it was Jonny Wilkinson. For my daughter I want her to be able to aspire to be anything she wants to be because she’s seen it, it’s tangible. It’s not unique and she doesn’t have to fight ridiculous battles or hear people tell her she can’t do it because she’s a girl. I don’t want that to be a consideration for her.

Is the idea of women’s opinions being 'less than' something you have experienced in the coaching world?
I am really lucky with Sharks that there has been no one who has made me feel that way when I speak about and coach rugby. What I have learnt is that you have to be really, really comfortable in a male dominant environment. I am probably the only woman in the building that is in a coaching role. But I am comfortable holding my own because I am really confident in my rugby knowledge and what I bring to the table. I think it can be hard if you don’t have that deep belief in your own knowledge, you really have to keep fighting that fight. To get female coaches into the international set up is a great stepping stone. I remember when Gisele Mather was in the coaching set up when I first got capped in 2006/7 team and she just had a different perspective. The guys were of course great coaches, but she just had a little bit more understanding of what we were going through and feeling. To have Amy Turner there for the girls is really important as it does just offer that different perspective.

What would you say to young girls who are perhaps sitting on the fence about giving rugby a go?
Go and experience it and give it a shot. Just because your friends don’t like it doesn’t mean that it won’t be right for you. The amount of young people that I speak to, and they say I don’t know if rugby is for me, who have then been brave, and found it is the best decision they’ve made. It is a message for us all, especially after the last year – just go give something new a try. It shouldn’t have to be an effort, it should be as simple as some people play tennis, swimming etc at the weekend and I play rugby and there should be no added stigma attached to that choice.

I think there is still a lot of perception surrounding Women’s rugby which can put young girls off. That’s why seeing the likes of Emily Scarratt is so important because she’s doing both. On the one hand looking amazing on TV as a pundit and then you watch her go batter Scotland at the weekend. They go hand in hand – you don’t have to be one or the other. You can be whatever you want in between as well. For the next generation of Red Roses it is so important that we continually reinforce these messages. We want them to aspire to have a go at rugby because it looks fun, or they might like the contact element and embrace its differences rather than see them as negatives.

With the Six Nations kicking off this weekend does it feel strange not to be involved, or will it just be quite nice to sit back and enjoy it as a spectator?
I am probably 50/50. I am really excited for the girls; it’s been a long time since they’ve played any international rugby and there has been some brilliant standout performances in the league. As an international rugby player there’s a lot of expectation on you from others and from yourself, to be able to enjoy it rather than have the pressure to perform is one of my favourite parts of retirement. A massive weight has been lifted and I am looking forward to watching them with no pressure.

You are playing with Sharks at the moment, when you do finally hang up the boots what would you like your legacy to be?
To inspire the next generation of Red Roses and to know you have had a positive impact on the game - that’s more than I would ever had dreamed of. I played a game internationally that I absolutely loved and love playing, and it gave me so many opportunities and so much joy. So, if that came across and I’ve inspired someone else to pick up rugby or another sport that they enjoy then that would be huge.