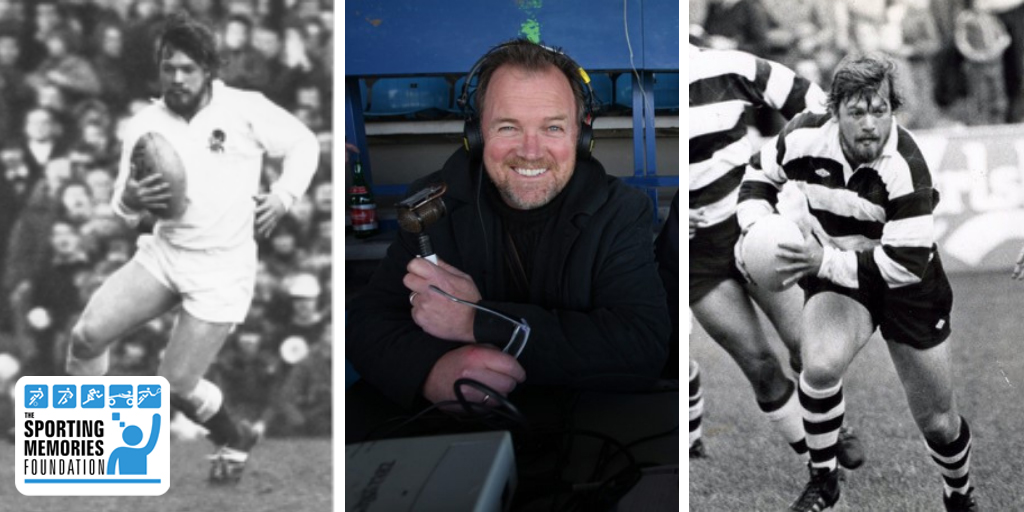 Former England International Alastair Hignell is no stranger to the power of sport. He played at the top level in both Rugby and Cricket, which led to a successful broadcasting career, before his medical retirement in 2008. Hignell was diagnosed with Multiple Sclerosis, an incurable, progressive and unpredictable disease. But as ever the former Bristol player, chose to use his profile and skills to help alleviate some of the fear surrounding the disease and help the MS community in whatever way he could.

Hignell’s desire to use his voice for good was ignited once again when his father was diagnosed with Dementia. An international sportsman himself, Hignell found his father lit up when discussing sport and revisiting those sporting memories not only helped his confidence but his cognitive ability. This firsthand experience of how sport could help his father in his darkest times led Hignell to become involved in Sporting Memories, a charity specifically created to help those dealing with Dementia.

Now, Hignell, with the help of the RPA is asking players and members to share their stories in the hopes of not only helping someone with Dementia but illustrating the power of community and friendship - attributes so often linked with Rugby. Below he shares with us his own story from England glory to his important work with Sporting Memories.

Tell us about the role sport has played in your life so far?
Sport has been my whole life. From a sports-mad youngster, hero worshipping my dad who was an international athlete and played cricket for Gloucestershire. From a very young age I used to track along and watch him. After successful careers in both rugby and cricket myself, I taught for a short period of time in those sports, alongside history. I then became a broadcaster for the BBC for the best part of a quarter of century before taking medical retirement.

Would you say there are any memories that really stick out for you in your sporting career?
I think making my rugby debut for England. It was the infamous battle of Brisbane in Australia in 1975. I was 19 years old and to be selected to go on the tour at all was one thing but then to get the chance of playing for my country. Nobody will ever replicate that moment when you are standing in front of the crowd listening to God Save the Queen knowing that you are about to play for England. It is the culmination of why you play rugby in the first place, of dreams for the people that coached you and the people who have helped you along the way. They get an awful lot out of it as well. Just the feeling that you were there as the anthem played - it still makes the hairs on the back of my neck tingle. It was just the most amazing experience.

Your broadcasting career was cut short when you had to take medical retirement, could you tell us about that time in your life?
I was diagnosed with MS when I was only 43. I was in the right place for my career to move on and I had a lovely view of what the future would be for me and my family, so to be diagnosed with something which is incurable, progressive and unpredictable was a huge, huge shock. I decided almost immediately that whatever profile, whatever skills I had, I would try and use them to help other people with MS and help raise awareness. I wanted to show people that it wasn’t a life-threatening condition, but it can be a life-ruining one. It is tough, it is hard work, but there are positive things that can be done. I was very much interested in seeing how people could live, how we could live with MS and using whatever profile and contacts I had to help the general MS community.

Your work with Multiple Sclerosis UK and spreading awareness for MS saw you win the BBC’s Sports Personality of the Year Helen Rollason Award in 2008, illustrating the far-reaching effect of your efforts. What was it that pushed you to use your voice for those with Dementia?
What really influenced me in getting involved with Sporting memories was my dad. He lived with Dementia for seven years and passed away in 2015. I wasn’t able to visit him as often as I could have because we were at opposite sides of the country but whenever I went back, he had drifted a little bit further away. My mum was determined to keep him at home, but each time we saw him it got harder and harder to have conversations with him. The thing that really fired him up, however, and made him want to try and remember and engage his brain more than anything else was talking about sport. He watched sport on the television almost all day and whenever we came back, and I was lucky enough to have lots of anecdotes to share in sport, he lit up, it was fantastic - that was an inspiration for me.

What do you think is so important about keeping those memories alive and why sport can be such a positive trigger?
One of the big things is confidence. You know if you feel you can talk about something then it gives you self-confidence. If you can jog memories by using whatever means you’ve got available it helps promote conversation, which helps promote confidence.

Sport is a unifying factor which links people across generations, jobs and social boundaries - it is very unique in that sense. You go anywhere in the world and you turn the talk around sport, and you’ve got a great social atmosphere. I’ve been aware of the values of memories and sport because the two games I was heavily involved in, rugby and cricket, have justifiable reputations for caring, team ship and looking after each other. Therefore, it did not surprise me when I find out some of the older rugby players that I know, who have got dementia, that their teammates from their time of playing are looking out for them. Seeing it firsthand made me very receptive to what Sporting Memories was trying to do when I came across them five years ago.

How did you get involved with Sporting memories?
I’d heard about a Sporting Memories event in Bristol. I thought: 'I’ve got a few of those stored up and if it helped people I would like to share them'. I was living in Brighton and the event led me to set up a meeting point at Sussex County Cricket Club. The pandemic made things much more difficult for these meet ups to happen, despite having 136 clubs around the country, as most of the Sporting Memories clients were in the ‘at risk’ categories. We successfully transferred the meetings online and I volunteered to collect memories for the website, so everybody could access them as and when they needed to take a trip down memory lane and trigger conversations.

What does the charity Sporting Memories do?
It is a charity tailor-made for people suffering with Dementia, depression, loneliness or isolation. It is not a campaigning organization or trying to point blame, it is all about making conditions for people suffering with Dementia better and using the power of sport to help in that process. I know from personal experience what it is like to live with an incurable condition and I know how beneficial outside help can be. The charity offers a range of services from teaching you how to talk to people with Dementia, opportunities to lead or join a group where you can share your experiences, or simply contributing a memory of your own for the website can make a big difference. This is a way that sporting communities can support people who might have been their teammates, fans or even neighbours. I am so proud to have been part of the rugby and cricket world, which relies so much on teamwork, respect and friendship. I want to use that force and energy to help people with Dementia.

Have you come across rugby players who have already found comfort in the Sporting Memories community?
Definitely. I interviewed Roy Laidlaw, former Scottish international & British Lion. He declared that he had dementia in October, and I was absolutely overwhelmed when I find out that his teammates from the 80’s, people like John Rutherford, Finlay Calder and Keith Robertson pop in on him regularly and play golf together. And that is what teams do. Those bonds carrying on down the years is beautiful, it’s what rugby is about. The message is clear for me – You can shy away from it or you can say: ‘how can I help.’

What would you like to see happen with Sporting Memories in the future?
Our aim is to gain more and more resources for those suffering with the disease. We have developed a Series called ‘Memories in 100 objects’ where a person can create a film about a sporting object that means something to them. We also want to set up a safe space online, where former professionals and their families can talk about the condition in a safe environment with those going through a similar journey.

How would you encourage players to share their sporting memories?
Anybody can write to me at Alastair.Hignell@sky.com or helen@thesmf.co.uk with their sporting memories. It can be anything from your debut at U8s, to scoring your first professional try. This will not only help those affected by the disease, but offer a broad picture of what rugby was like in the past, the present and what it means to people. I hope these memories can give all of us a sense of why we play this wonderful game.