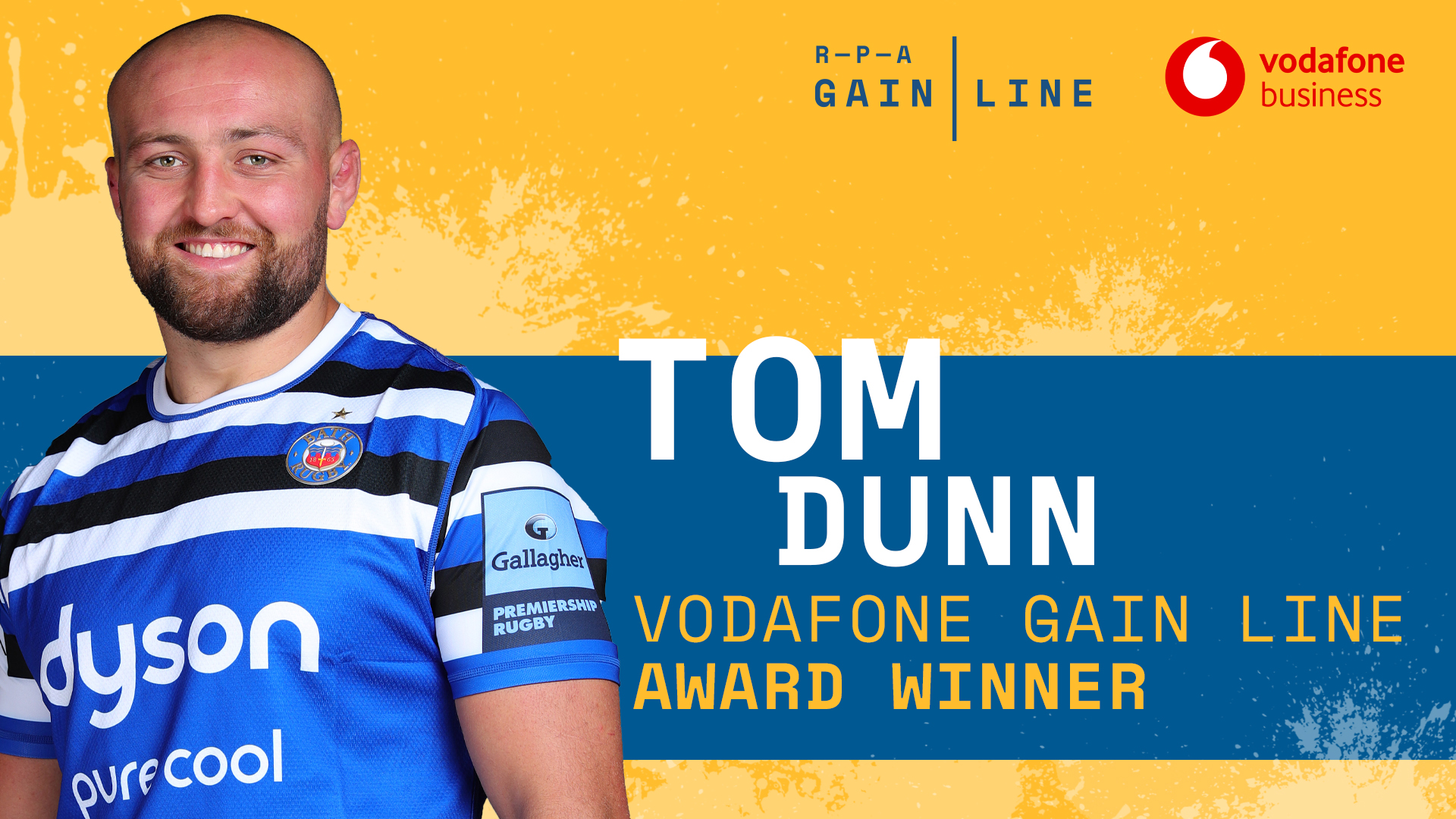 The Rugby Players Association is delighted to announce Tom Dunn as the worthy recipient of this season's second Vodafone Gain Line Award. The Bath-born England international made his professional debut for his home-town club against Calvisano in the European Challenge Cup in 2012. He has gone on to represent the West Country outfit more than 100 times across all competitions. After an impressive season with the club in 2017/18, Dunn was called up by Eddie Jones before claiming his first cap in last year's Six Nations against Italy. The 28-year-old hooker continues to be a vital figure in Bath's front row, crossing the white wash six times already this season.

Dunn's deep connection with his roots can also be seen in his off-field endeavours. After studying at Bath University, he has been a constant attendee at RPA career insight days, personal development courses and utilising contacts available to him in the rugby community. This has resulted in Dunn embarking on a journey to set up his own Butchery and Deli in Bath.

After a year of work experience with a consultancy firm during his time at Bath Academy, Dunn quickly realised an office environment was not where he saw his future. As a front-row forward his love for food went beyond just fuelling his body. Not only did he enjoy the processes of barbequing and braising meat, but equally how it was sourced. As a chicken owner already, Dunn hopes in the future to have his own small holding of goats and pigs.

This burgeoning passion led the RPA to put the Bath native in contact with Ruby and White, a wholesale butcher based in Bristol. Still early in his career, Dunn spent his weekends there, when not on Bath duty, starting at 3am in the morning, learning the trade on chicken carcasses and deboning pork legs.

The experience fuelled Dunn's desire to learn more about the butchery trade. The RPA put the forward in touch with Vale House Kitchens in Tilsbury, where he completed various butchery courses, resulting in him curing his own bacon and pig cheeks. His education continued when he did a spell at Ruby and White's shop in the heart of Clifton. This experience of interacting with customers led Dunn to the realisation he wanted a butchery and Deli to call his own.

This eight-year journey, however, has not been without difficulty. With a place all set and ready to go in the heart of Bath named 'Black and White', the sale fell through. However this has not deterred Dunn, who is already setting about looking for the next property and is positive his dream Deli/Butchery will be a reality soon enough.

As his search for the perfect space continues, Dunn is also making sure the Bath players will be loyal customers, creating weekly meat packs for his teammates. Many have different objectives in terms of nutrition, therefore he will cater to their needs. From the 'Leanness Pack' including turkey breasts, venison, and chicken to the more calorific 'Gainers Pack'  including red meat, rump steaks and meatballs, everyone is covered. Balancing his burgeoning business alongside his international rugby career and being the head coach at South West Division 1 side Chippenham RFC, Dunn continues to successfully spin many plates and is a worthy Gain Line Winner.

On winning the award, Dunn said: "Thanks to the RPA for awarding me the Vodafone Gain Line Award of the season, I am very excited to work with them and have their support in my start up phase of the company. I hope together we can produce some exciting products and a valued service to the community with top quality traceable meat . I want to thank my RPA Development Manager Matt Leek for all of his help and support he’s given me with this project and my journey so far."

Dunn's RPA Senior Development Manager, Matt Leek, said:  "In a year where all of us have had to show a great amount of resilience, I am proud of Tom for working hard and pursuing a business and project, that no doubt, will have a positive impact for him, his family, as well as Bath Rugby and the local community. Tom is among an ever increasing number of players, that I am fortunate to support, who are very proactive towards their own personal development and understand the importance of preparing for life after rugby.

"Tom has made a fantastic impact this year with his on-field performance with international representation, he’s also developed a brand that will have an inclusive and positive impact to his local community. He is a great example of someone who can share a good study about the rollercoaster that is starting and running a business alongside home schooling - whilst his wife Jen has been working frontline for the NHS at the Royal United Hospital in Bath."

Anne Sheehan, Business Director, Vodafone UK, said: "We extend our congratulations to Tom Dunn as the latest recipient of the Vodafone Gain Line award. Running a small business whilst carving a professional rugby career is no easy feat – both require an equal measure of time and commitment. We wish Tom the very best in his sporting and business endeavours."