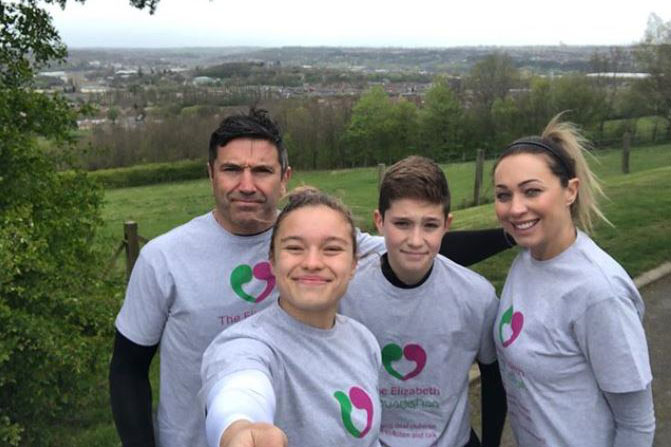 She is a British jiu jitsu champion, has represented Great Britain in sprinting at the deaf Olympics and at just 18 became part of the England Rugby 7’s squad. But Jodie Ounsley’s next challenge will require her to harness all of these talents as she takes on a 24-hour Sportathon in aid of The Elizabeth Foundation.

How did you come up with the idea of the Sportathon and who are you raising money for?

Charities are also struggling at the moment, with all their planned fundraisers being cancelled. I decided to try and help raise some money for a very special charity, ‘The Elizabeth Foundation’. It’s a very personal cause for me. It helped me and my family in my early years and definitely got my life off to the best possible start and I'm not sure I would be the same without them.

What does the 24-hour Sportathon involve?

We have 13 guest instructors leading sessions on ZOOM every hour. They are all experts in their own fields and includes an Olympic, commonwealth and world cup rugby player, international players, MMA champions, Kickboxing champions, Brazillian Jiu Jitsu champions, ex pro RL players, GB hammer throwers to name a few. we even have a Key worker (fireman) doing us a kettle bell master class between a night shift!

Some sessions will be tough others are fun. We have a virtual World coal carrying championship in place of the cancelled race that was meant to happen today. Both my dad and I are previous winners. Also a gymnastic session for beginners will be great. I’m particularly looking forward to a game of family rounders by moonlight in the early hours.

Which family members will be taking part, did anyone take some persuading?

All my immediate family are involved, mum, dad and brother Jack, aged 13. They all happily volunteered but I'm not sure they will appreciate what 24hrs of non-stop classes will feel like. Fortunately we are a pretty sporty family so I didn't need to pressure anyone to agree!

What is the Elizabeth Foundation and how important was it for you growing up?

The Elizabeth foundation help pre-school deaf children and their families. They focus heavily on speech and language to prepare you for a happy successful life in the wider world. I started going to their pre-school at the tender age of three months old. I was born very premature so this was incredibly early. In the weeks, months and years leading up to school age they gradually built up my communication. At first I was just sat on a music box feeling the vibration. They built up my eye contact, concentration and understanding of facial expressions. This later developed into speech and language. By the age five I was ready to enter mainstream school, already used to a classroom environment for several years. They gave me an amazing start in life and we will always be very grateful.

You were also nominated for the National Diversity Awards 2020 was that a big highlight for you and were you expecting it?

This came out of the blue for me and I feel very honoured to be nominated. Voting has started and I have been humbled by the voters positive comments. Most of these are around my work visiting and doing talks in deaf and special needs schools. I realise I am in a very privileged position and intend to use this opportunity to try and be a positive role model for kids who remind me of the younger me.

You signed your England Sevens contract last August, has this year been a whirlwind?

The last four years has been a whirlwind to be honest. From starting rugby and quickly progressing through the pathways. Receiving a sports scholarship at Loughborough aged 16 and then aged 18 to be offered a contract with England 7s is still quite hard to take in for me. I am now incredibly lucky to be able to travel the world playing rugby surrounded by a special group of people who have been so supportive and help me improve every day.

What has been the highlight for you since joining the squad?

I was selected for the Team GB training squad for Tokyo 2020. My debut was v NZ against some of my idols and that was amazing. I’m just so grateful to be able to experience what I have so far as I would have never expected to do any of these things. However, I will always remember my first try on the World Series, it was an amazing feeling. It’s been a big step up from international U18s and being deaf has added an extra factor to consider. I have so much to learn but the coaches have been amazing helping me adapt and communicate well with the team, I’m so excited about the future.

Did you ever imagine from starting at Wakefield club Sandal you would have been selected for the Tokyo Olympics?

My first visit to my local rugby club was supposed to be a bit of a one off. My dad had been putting me off for a few years due to my cochlear implant. He eventually agreed to a taster session thinking I might get it out of my system and move on. I trained mid-week and was invited as sub that weekend. I was brought on for the last few minutes. The ball popped up to me, I stepped around a few players and ran the length of the field to score my first try. There was no going back after that, I was just completely hooked. A crazy rugby journey followed, one in which would give me friends, confidence, educational opportunities and now a contract travelling the world with the possibility of an Olympics. Its really hard to comprehend but I feel this is just the start, I have so much I want to achieve in the years to come.

We wish you the very best in your Sportathon, is there anything you would like to say to people to urge them to donate?

If you can make a donation to the Elizabeth Foundation, how ever small, please do. These amazing people are literally changing the lives of young deaf children. I can give my first hand recommendation of this. Also please follow the Sportathon on Instagram page to find out more information about our event, all the footage of the day will be also shown on here @ounsley24hrsportathon.

To donate to this incredible cause please click HERE