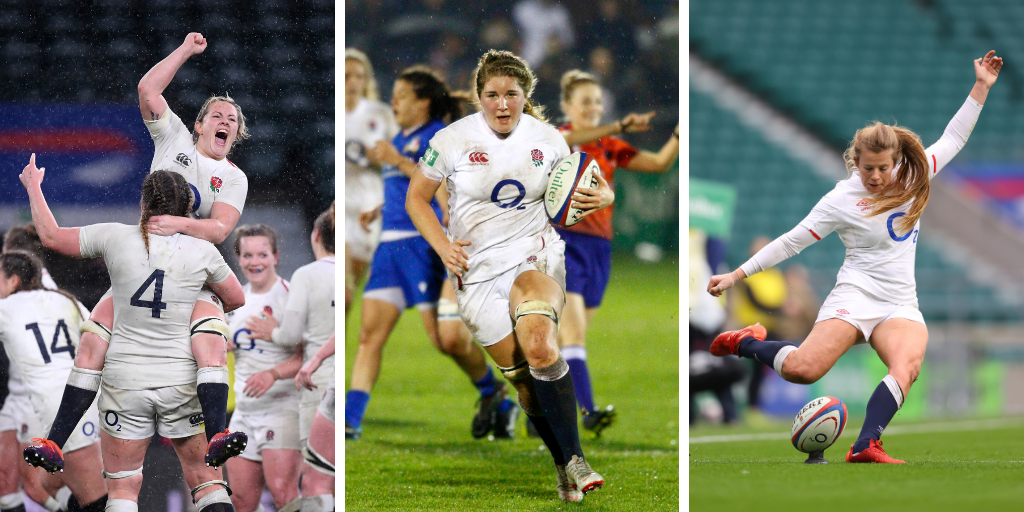 After playing a pivotal role in the England Red Roses unbeaten year, including the Six Nations Grand Slam crown and more recently a double victory over France in their Autumn internationals, Poppy Cleall is also finding time to promote Women's rugby where it needs it most.

We talk to Poppy about her Women's Rugby Agency and how she hopes to inspire the next generation of players.

How did you come up with idea of starting the Women's Rugby Agency (WRA)?

It all began just over a year ago. Loads of people were coming to me with requests to visit their school, clubs etc. I thought if I am getting all of these messages, how many more players are getting the same. We always try our best to reply and make appearances, but normally you don't have the time or the resources to do it. That's when the WRA was born - I thought if I can set up one place where people can go to contact and request female players for specific events, coaching workshops or awards ceremonies then this could be mutually beneficial for the players and more importantly the wider game. The whole aim of this was to make female athletes as accessible as possible to any club, school or anyone who wanted them. We want to inspire the next generation and get these incredible female role models out there.

What has the response been so far from the clubs and players who have used your service?

During the pandemic we put out a post offering surprise messages and zoom calls for clubs, which went down really well, with more than 50 video messages sent out. One of the clubs we worked with was Basingstoke where we jumped on a zoom as a surprise each week and one of the girls nearly fainted when she saw Sarah Bern. When lockdown lifted we managed to get some players out to touch rugby events with more than 90 girls playing and it was great to give back and boost the morale.

When Zoe Harrison went to a club in East London, she loved it because they even offered her dinner at the end of it! The response from the young girls and even the adults, because we’ve done a couple of adult sessions, has been amazing. At the end of the session you actually have time to chat to them, whereas you can't really do that when they come and watch the game. It’s so hard for people and grassroots clubs right now so it was brilliant to give something back.

How have you seen the business grow in the last 12 months?

At the start it was just word of mouth and social media. But then we did a campaign with the perception agency and Flo Williams, who also worked on the #weareenough campaign, which boosted our reach. When we came out of the pandemic it was great to have all these clubs interested in doing something different, to give back to their players.

Why do you think it is so important for young female players to see these professional athletes come in to their club?

I remember when I was in the girls section and a England ladies player came into my club, Emily Feltham (Cook). She was a local player from Salisbury and I’ve still got the photo on my wall of her visit, so I know how much these appearances can mean to young girls in the sport. When I was thinking about how to organize the WRA all I knew was that I wanted to be able to do something which meant another young player could have a picture on their wall which could inspire them.

If clubs were interested in getting in contact and booking some players how would they go about it?

All they need to do is send an email or an Instagram message to WRA (below), we can then get back to them and discuss what they are looking for and what fee is suitable. We are fortunate to have an impressive roster of players including Rocky Clarke, Marley Packer and many more, but we also have the ability to book players who may be needed for specialist sessions. We create a 100% bespoke service, therefore this can be anything from a presenter for an awards evening to a technical kicking clinic with Katy Daley-McLean or Zoe Harrison.

Why do you think this is important for female representation as a whole?

There's nothing more demoralizing when it is a female rugby club or team and they go: 'right we want to get a player to come in and present the team's End of season awards' and they say ‘let's get that bloke in.’ We want to change that and allow these girls to have access to a role model they can aspire to be. It doesn’t matter how big or small your club is, this is attainable.