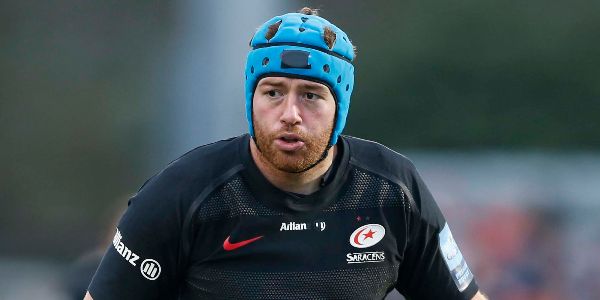 Saracens hooker Joe Gray has today been named the winner of the second RPA Gain Line Award of the 2018/19 season. The award was created to celebrate the proactivity and off-field achievements of RPA members.

The experienced front rower joined Saracens last summer and recently signed a contract extension with the reigning champions. Gray began his career at Northampton Saints before enjoying a successful spell at Harlequins where he made more than 150 appearances, helping them to win their first Premiership title in 2012. Joe went on to represent England in 2014.

Joe has been proactively engaged in his personal development ever since being offered his first professional contract with Saints 13 seasons ago. After suffering an injury, he began coaching at a local school. This continued throughout his career, culminating with an RFU Level 2 coaching qualification and the role of Director of Rugby for Barnes Rugby Club in National 2.

Alongside coaching, Joe has a passion for making things and completed a two-year Level 2 Carpentry course while at Harlequins. It was during another enforced spell on the sidelines that Joe had a lightbulb moment – dismantling and modifying a power tool to turn it into a recovery aid to alleviate discomfort in his leg. Despite initial scepticism from his teammates, Joe’s invention was a hit and before long, he was taking orders from other members of the squad.

Joe researched and developed his products, made prototypes, and has now successfully co-founded MyoMaster, a sports recovery business that is making recovery accessible and affordable for everyone. Since launching the company with his wife in 2018, Joe is already taking orders from players and the public.

Upon winning the award, Joe said: “Thank you to the RPA for this award. Without their help along the way I wouldn't have been able to achieve many of things I have today. It's always been on my mind that I need to be able to transition into life after rugby and the RPA are great at helping you explore any avenues that you are interested in.”

RPA Head of Personal Development, Ben McGregor, said: “Joe is a leader and has a positive influence on those around him. He is the perfect example of a proactive player who, throughout his career, has seen the value in exploring his ideas off pitch. As well as being a role model and mentor to other players, he’s a natural entrepreneur. I’m delighted to see his hard work and continued belief in himself being reflected in his successful business which supports others to approach recovery in the same way.”

To find out more visit: www.myomaster.com

This is the second of three Gain Line Awards to be made in the 2018/19 season. The award highlights a player’s off-field personal development success and is judged by a panel consisting of RPA Rugby Director, Richard Bryan, RPA Non-Executive Director, Joe Ryan, and RPA Alumni Representatives, Chris Bentley and Rob Vickerman.

The RPA Gain Line programme (jointly funded by the RPA, RFU and Premiership Rugby) is a central pillar of the RPA and provides its members with essential off-field education, personal development, career transition opportunities and welfare support.