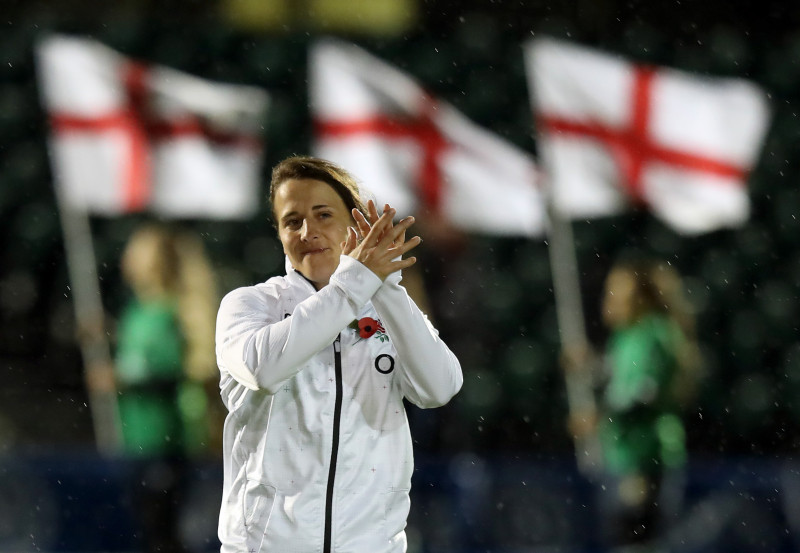 She is just the fifth player to achieve 100 test caps for England’s Red Roses and has scored more than 500 points for her country. Meet influential flyhalf and 2014 World Cup-winning captain, Katy Daley-Mclean.

How does it feel to have reached 100 caps for England?

It’s an amazing feeling and something I never thought would be possible. As a young player I had grand ambitions to wear the England shirt and make my family proud, but I never imagined I would appear in more than 100 matches for my country. It was an incredibly special moment and something I will cherish for a very long time.

Can you describe what you remember from your first international cap against Scotland in 2007?

I remember feeling extremely nervous. I started the match on the bench and I was very anxious while I waited and wondered if I was ever going to get on the pitch. I eventually made my debut in the 60th minute and it was just a crazy moment. Deep down I was scared as hell, but I loved every minute of it. To be honest, looking back I was probably more nervous about the song I had to sing at the end of the game.

You join Sarah Hunter, Tamara Taylor, Rochelle Clark and Amy Garnett in making 100 appearances for England. How proud are you to feature alongside these players?

It’s a very special feeling to join such an amazing list of England players. All four players are legends of our game and have all been a huge inspiration for me in my career. I remember when Sarah Hunter made her 100th appearance and I was so happy for her, but I also got some banter from the girls because she beat me to do it and I was still about 10 caps shy. So, to finally get over the line and join these four legends is a great feeling.

Your international career has spanned more than 11 years, what do you put this longevity down to?

A bit of stubbornness and refusal to not let things get me down. I love the game and as I have grown older my enjoyment for playing has increased. I now have so much more experience and understanding of the game and to me that has allowed me to play with more freedom and less pressure.

How much has the women’s game changed since your debut in 2007?

A huge amount. The game is unrecognisable to what I remember in 2007. We have so much more support in 2019, our welfare is looked after, and we play at a range of great stadiums, with large and patriotic crowds. The game itself is faster, but also more physical. This has forced our game to be more advanced in terms of tactics and the way we train and prepare for matches.

Can you touch on the significance of full-time professional contracts being introduced for the 15s squad?

It’s hugely important for our team and something we are very proud of. To me it’s a crucial step for our game and will hopefully inspire kids to take their rugby seriously, knowing that they can make a career out of playing for England. As one of the older players I am immensely grateful for the support of the RPA and the players who worked tirelessly to make this dream a reality for us all.

You had a spell playing for England 7s, but do you feel your game is more suited to the 15s game?

Definitely. 7s was an amazing experience, it’s such a physical game and its great fun to travel the world playing rugby. I loved representing Team GB at the Rio Olympics, it was a seriously awesome experience and something that I am very proud of. However, I feel my game is now more suited to the tactical aspects of the 15s game and being able to build pressure over 80 minutes of rugby.

What has been your biggest career highlight?

Winning the World Cup in 2014, without a doubt. It was an incredible journey for our team and it was such a proud feeling to lead my country throughout the tournament. We worked so hard, and faced many obstacles along the way, but the moment we finally got our hands on the trophy was such a beautiful feeling.

Who has been the biggest influence on your career?

My Dad has been my absolute rock. He has been through it all with me and been a massive source of influence and inspiration. From driving me to rugby at the age of five, to travelling to the World Cup and Rio Olympics to watch me play, he has always been there for me. To have my Dad present me with my 100th cap in November was very special and made the occasion perfect.

What would be your advice to a young player just starting their England career?

My biggest piece of advice would be to just stick at it. Don’t give up on your dream and work hard to make it a reality. My career has gone up and down and I have faced some huge challenges, but it’s about how you respond and how you come back from dark moments, that will shape you as a player but more importantly as a person.