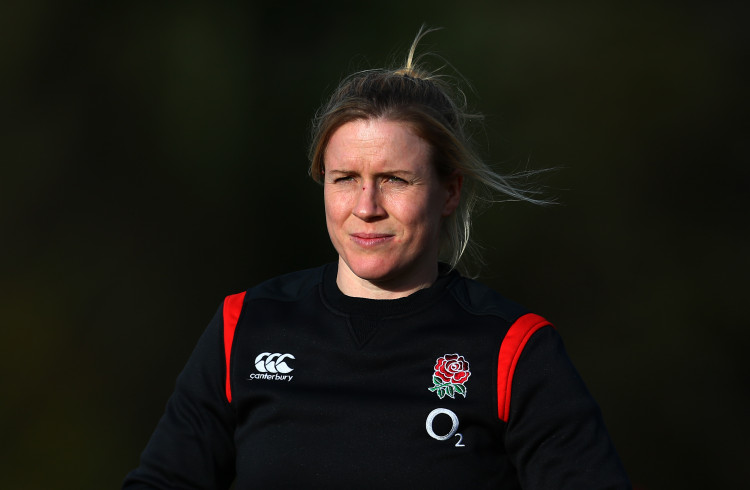 Renowned as one of the finest Red Roses to have ever graced the rugby pitch, Danielle ‘Nolli’ Waterman, chats through her incredible England career, pinpointing her greatest highlights and explaining why she felt it was the perfect time to retire.

Nolli, your illustrious international career is over, how does it feel?

I’m extremely proud and grateful to have had the opportunity to wear the red rose. It’s been an amazing journey with so many incredible memories, making lifelong friends, and playing alongside and against some of the best players to have ever played the women’s game. I feel enormously privileged, it’s a special feeling looking back at my England career and ultimately my success is down to those who been there for me since day one, my family and my teammates.

You were named the RPA’s England Women’s Player of the Year last May, was that the icing on the cake?

It was one of the most special things I have ever achieved as a player. To be nominated for the award by your teammates, even before I announced my retirement, was incredible and then to be named the winner was even more special. You can never underestimate the support of your teammates, and for them to put me forward for this award was such an amazing feeling. My family were in the room too which meant the world to me and their love and guidance has been the driver behind my success. I owe so much to them.

Why did you feel it was the right time to hang up your England boots?

I really enjoyed my final season for England, I played some great rugby and was loving the young and fresh squad we were building. At the same time age does determine when you need to retire, and to have the opportunity to do it on my own terms, especially after the injuries and struggles I have been through, was an extremely important factor for me. It was a hugely difficult decision, I have loved every minute of wearing the white shirt, but I feel so proud to have made it and I’m massively excited for the future.

You finished with 82 caps and 47 tries, looking back did you ever think you would make such an impact?

Absolutely not. It’s not until you finish playing that you then have an opportunity to reflect on what you have achieved and how far you have come. The women’s game has developed so much since my debut and I am extremely proud to have played a small part in the rise of our sport. Not just from a playing perspective, but also having coached a number of the girls who have now represented England has been an amazing privilege and something I am so proud of.

You featured in four Rugby World Cups and represented Team GB at the Olympics, but is there one overall highlight?

Winning the World Cup was simply amazing. We worked so hard for the victory, and the dedication from every single player was immense. Not only did the result change the game massively in England, it was the result of the journey we had been on, the friendships we had built and the struggles we had faced together. The impact of our victory can not be underestimated in terms of the way it put women’s rugby on the map. It created such a buzz of publicity for our sport and will always remain something we can all be very proud of.

Making your debut in 2003 at the age 18, can you describe how far the women’s game has progressed since then?

It’s crazy to think how far the game has come during my career. As England Women we have always made sure we approached training with dedication, commitment and professionalism, despite everything we faced. Since my debut in 2003 things have changed dramatically. The level of technology and sports science now involved in the game has transformed every aspect of the sport. I remember in the early days we used to handwrite our training diaries and then post them in for analysis and feedback. Now everything is completed through an app, which transforms data instantly and is analysed daily. We also have GPS constantly measuring our performance throughout training and match day. From a kit point of view, we have finally have some that actually fits and is designed specifically for us. It’s a terrific feeling to see the sport in such a positive position. I was at a rugby event recently and I asked a group of young players which team they support. The first response I received was the England Red Roses. I remember when I was 10 and I didn’t even know England had a women’s rugby team. So, for the public to recognise who we are, and to be inspired by us, is an amazing feeling.

Your rugby career continues with Wasps Ladies in the Tyrrells Premier 15s. How proud are you of the new competition?

Absolutely. There have been massive changes to the Tyrrells Premier 15s over the last year and rightly so. The competition has been crying out for a professional level of support for our club players for a long time and thankfully we’re finally reaping the benefits. The foundation of players in the women’s game is only going to get bigger and stronger through the Premiership and will hopefully prove a vital pathway for ladies to progress to the international game. For me, I love playing for Wasps and hopefully we can continue developing as a team and tackle the 2018/19 season with confidence and a desire to create our own success.

Looking ahead to the future, what are your plans for life away from rugby?

I think I will always be involved with rugby one way or another because it’s my passion and I love the sport. I am currently coaching the ‘Centre of Excellence’ at Wasps, working with the U18 girls, which has been hugely enjoyable and a great learning experience. I really enjoy working with the young players, helping them to improve and watching them develop into great rugby players. I am also massively determined to continue developing my opportunities in the media. I have enjoyed working for Sky Sports recently and feel now is the perfect time to showcase the women’s game to an even greater level, by developing our brand off the pitch and showing female pundits can analyse the sport and we can tactically understand the game. We often say in women’s sport if you can’t see it, you can’t be it, and if I can inspire others through my work then that would mean the world to me.