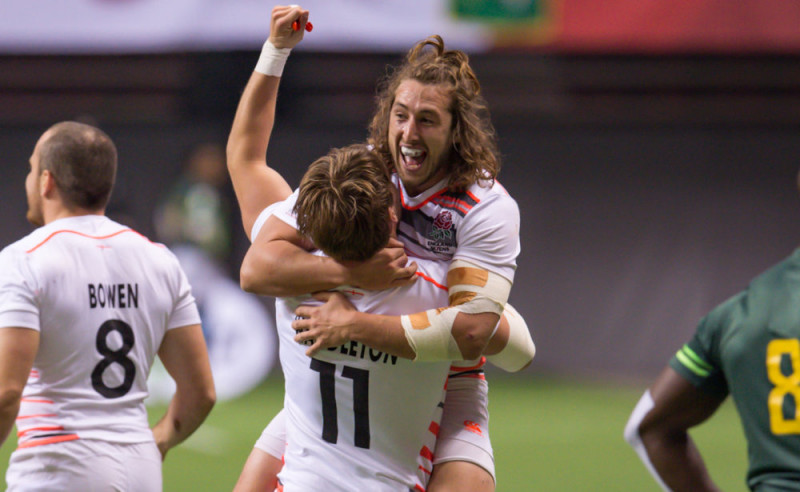 At the age of 27 and with more than 200 matches and 530 points to his name, Dan Bibby is recognised as one of the senior members of the England 7s squad. However, when it comes to parenting Dan reveals he is very much a rookie. In this interview, Dan chats through his career to date and explains how he juggles early fatherhood with touring the globe playing rugby.

What do you find the most enjoyable aspect of being a 7s player?

As a playmaker I just love being able to get my hands on the ball. As a 15s player you can go a whole game without touching the ball, especially on cold and wet days, you often find yourself chasing kicks up and down the pitch. With the 7s game being so much faster, you’re constantly involved in the play, making regular tackles, cleaning out in the rucks, scoring tries, it’s awesome. I also love the excitement of the circuit, and the extremely cool places we get to visit. Not to mention the great group of lads we have. To have the opportunity to travel around the world playing rugby with 11 of your best mates is very special.

As a senior member of this England team, what would be your advice to young players coming through the 7s system?

You need to understand how amazing this opportunity is. Being one of the older players in the squad I’ve obviously been on the circuit for several years now, but the excitement for me never disappears. I remember making my 7s debut at the age of 21 and how proud I felt to wear the England shirt. It’s incredible how fast time flies once you’re on the circuit and playing for your country. I think that’s the most important piece of advice I can give, enjoy each moment and never take this opportunity for granted.

Who has been the biggest role model throughout your career?

As a kid growing up in the North I was totally inspired by Jason Robinson and Andy Farrell. I watched a lot of rugby league back then and they were incredible. In my eyes they remain Wigan legends. When Robbo moved to rugby union, it was just awesome. For me, even though they were my role models as a kid, they are two guys who have given me an enormous amount of inspiration throughout my 7s career.

How do you juggle being a parent while also travelling the world playing 7s?

There’s a couple of lads in the squad who have young kids at home too, and I’m not going to lie it is tough. At times, especially after a disappointing match or tournament, you sit in your hotel room and all you want to do is be with your family. Don’t get me wrong, the circuit is unreal, and we have so much fun, but there are dark times and moments where the travel and being away from home takes its toll. When you receive videos from home, and you’ve missed their first steps or first words, that’s when you feel the distance the most. At the same time, I’m doing something I love, and my family and friends are so supportive, and I feel incredibly proud to represent them. During the London 7s last season it was such a brilliant feeling to look up in the Twickenham stands and see my little lad Jasper in an England shirt with Bibby on the back, cheering me on. That’s what motivates me, everything I do is for my family.

Has the experience of being a dad helped you become a better rugby player?

I think so. Being a dad has given me a huge amount of mental resilience. Before we had Jasper, I would think about rugby too much. After a bad training session, or a disappointing result, I would overly think about the game, leaving me stressed and frustrated. Now with Jasper, I get home and automatically I switch off from rugby and my attention turns to him. It’s been something which has really helped my career, I feel more refreshed and you understand that rugby isn’t everything, there is so much more to life.

Can you touch on the book you are currently putting together with your wife?

The book started off as a bit of fun. I was very keen to write a blog about Jasper’s first year and some of the fun things we’ve done and the challenges we’ve faced. I thought it would be good to pen our thoughts and memories and then when he is older he can read it. Once I started writing my wife read it and found it hilarious. She then started writing her side of the experience and from there we found the content was great and naturally concluded we should combine both sides of the story in a book. Basically, as first-time parents we didn’t have a clue on earth on what to do. We read all the parent books before we had Jasper, and to be honest nothing really inspired us. Hopefully by writing this book we can give an insight into our story, with loads of humour, but also provide a guide for other first-time parents. In this modern age, everyone looks at things through a lens on social media where everything seems happy, positive and under control. But we felt we needed to strip all that away, and give an honest insight, explaining that it can be difficult and there’s nothing to be ashamed about. Whatever you are doing, don’t think it is wrong. There is no right or wrong way to do things. This is normal life and parenting is tough. Through this book hopefully we can inspire and encourage other parents to understand it’s ok to feel like you’re struggling at times.

When do you hope to publish the book?

With Jasper growing up so quickly we are obviously very busy and don’t always have much spare time. For us, it’s about working towards a realistic date, writing at our own pace and then hopefully producing something we can be proud of. Even if we publish the book and no one buys it, at least it’s been an awesome thing to do and something I’m sure we will look back on with fond memories.