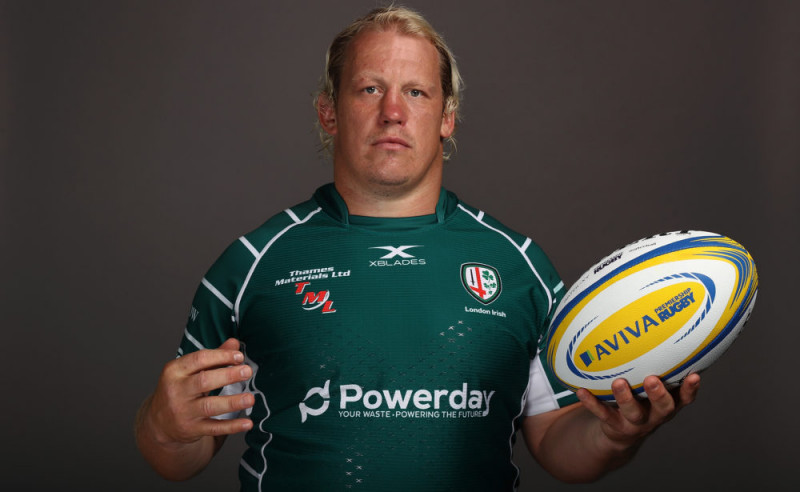 Meet Petrus Du Plessis, a man with a stacked trophy cabinet, a physio qualification under his belt and an alter-ego called Borislav. We dive into his wonderful world to hear more about his fascinating life off the pitch.

Petrus is it true you’re the only qualified physiotherapist currently playing in the Premiership?

It’s definitely a possibility and I haven’t heard of any other players who are fully qualified. I might be wrong but it’s a nice thought if I am. Being a qualified physio is something I take a lot of pride in and hopefully will set me up for a cool future post-rugby.

You won three Premierships and two European Champions Cups with Saracens, what made you decide to move to London Irish?

I loved my time at Sarries, it’s an unbelievable club with amazing people. But in November 2016 I started to have conversations with Mark McCall about my future. I played more than 100 games for the club, it has a special place in my heart, but with the likes of Vincent Koch and Juan Figallo on the roster I knew I wouldn’t be getting much game time. I then spoke to Brendan Venter who suggested I move to London Irish where I would be offered a full-time playing role. I was still injury-free, I had never had an operation, and still had a huge desire to play on. I decided it was the best option for me and signed a two year deal to join the club and become one of the senior leaders.

Coming from such a successful culture have you enjoyed the transition to a new club?

It’s been an awesome transition so far, they have given me a small role of leading the culture and also helping out with scrummaging and lineouts. To be honest London Irish already have a terrific culture which is led superbly by Nick Kennedy. They had a very successful year in the Championship last season and the guys all get on really well, they love playing together and are striving to improve every day. Culture is something that takes a long time to develop. You want to rock up to the club with a smile on your face knowing you enjoy being there. I realised during my time at Saracens the more you spent with each other away from rugby, the stronger the culture is within the club and the better the performances are on the pitch.

Can you explain the story behind your ultra-ego, Borislav?

Borilsav is a character which formed from very strange circumstances. Brace yourself for an epic tale. The first time I ever really thought about the possibility of acting was when I took my son to an audition for a role in a movie called London Fields. The director was a big shot from Hollywood but strangely wasn’t very experienced with working with kids. So he asked me to help him out with my son’s audition. I happily agreed and afterwards he wanted me to leave my number so he could get in touch about future opportunities. Literally three weeks later he offered me a small part in the film. At this point I was laughing my head off, it was the most bizarre thing I had ever been asked to do. Afterwards I spoke to my son’s agent who suggested I start taking acting classes to help me boost my confidence. I really enjoyed the experience and off the back of that I got a role in another movie, where I played a Russian gangster. Oddly they asked me to come up with my own character name for the film. Naturally I chose to call myself Borislav. When I returned to Saracens the following week the guys had caught wind of what I had been up to and made me stand in front of the group and perform my Russian lines from the movie. A week later it was my turn to run the social meeting so I rocked up in my red underpants, with my black moustache and did the whole meeting in character as Borislav. That led to more and more things, the Twitter account, the videos, and from there Borislav was truly born.

We understand you’re also a huge heavy metal fan, where did this interest come from?

I am a massive rock fan. I recently went to see Iron Maiden in London which was so cool. I know the band’s manager so I got to experience the whole show as a VIP. I guess it’s always a question I’ve been asked and I think the answer comes back to being a kid in school. You either played classical music on the piano or you rocked out to Metallica, Guns n Roses or ACDC. I was definitely one of the rock kids.

What does life after rugby hold for you and do you think Hollywood will come calling?

Definitely not! They can call me but I won’t be picking up the phone. To be honest I’m still really enjoying my rugby and loving my time at London Irish. The next chapter has always been a scary thought. I still want to learn more about myself each day and have been working really closely with my RPA Personal Development Manager, Kim Johnson-Pool. I have a goal to gain my level 2 coaching qualification this season and the other day I got in touch with ITV’s Loose Woman to organise work experience on the show. For me it’s about being active and searching for things I know will benefit me post-rugby.