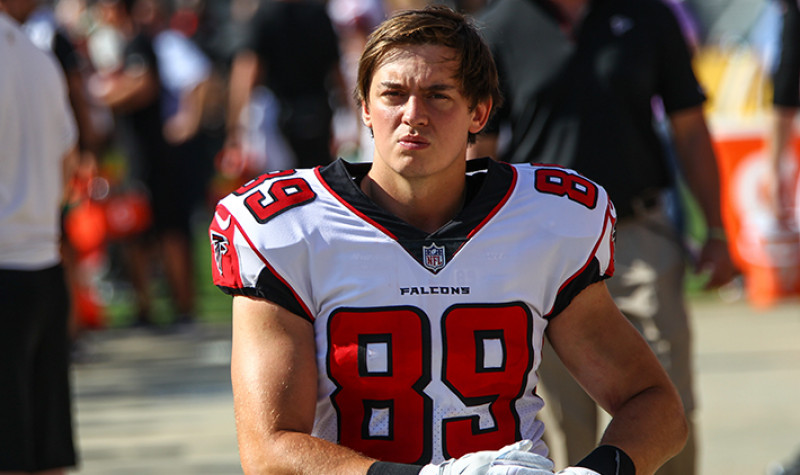 Fresh from making his Atlanta Falcons debut in a pre-season match against Miami last August, former England 7s star Alex Gray gives an exclusive insight into his new career in the NFL.

It’s been an incredible journey so far. I can’t deny it’s been a difficult challenge, but it’s been a hugely rewarding one too. American Football is the type of sport where the more you put in, the more you eventually get out. I am really trying to focus all of my energy on making sure my work ethic is to the highest quality. The game is so different to rugby. Rugby requires instinct on both sides of the ball but American Football has so much more detail, and you need to learn an incredible amount to understand the workings of each play. I would describe the whole experience like trying to learn a second language. Plus you’re up against world-class athletes who have trained their whole lives in the one position. It’s been tough, but it’s exactly the challenge I was after. Every day you rock up to training knowing you’re being evaluated and if you’re not ready work hard, you’ll lose your place to someone else.

I was watching the TV show ‘NFL Undiscovered’ last year and thought to myself I could give that a go. At the time I was ready for a new challenge. I have always been a fan of the game, but I’ve never been overly knowledgeable about the sport. Growing up I played Madden on the PlayStation and would tune into games on Sky but that was about the extent of my understanding. After watching the show, I started to look into the opportunity more and more. From there it was just a crazy set of circumstances that followed. I missed out on Olympic selection with an ankle injury and then made the moved back to 15s with Yorkshire Carnegie. Things didn’t work out for me there, I picked up another injury and really felt like I needed the ultimate change. From there I spoke to my agent who got in touch with various contacts in the US and one thing led to another and before I knew it I was an Atlanta Falcons player.

A Debut to Remember

It was an unbelievable experience. Even though it was a pre-season game against Miami, it was above and beyond anything I have ever experienced before. I played professional rugby for eight years, playing in front of big crowds, but this was to a different level. I didn’t feel too nervous before the game. I tried to approach it like I normally do, focusing on my skill set. The only thing that really hit me was when we were standing in the tunnel waiting to run out and I looked around and I was surrounded by guys in big pads and helmets, proudly wearing the Falcons jersey. I took a second to myself just to gather my thoughts, it was such a surreal feeling. In a strange turn of events, my debut also came exactly one year after the Team GB lads won the silver medal at Rio.

Atlanta are a very unique team. Everyone has this perception that the NFL is a very ruthless and cut-throat industry, where it’s every man for himself. Don’t get me wrong that’s very much the case, but the culture at Atlanta is outstanding. It’s reminds me of a rugby environment. They label the club culture as the ‘brotherhood’, where everyone looks after one another and every action is in the best interests of the team. When our players take the field they do so because they care about the guy next to them and want to do their very best for the team. It’s an awesome environment to learn and develop.

It’s definitely a long grind. I’m normally in the club for 7:30am to stretch and have breakfast. From 8:30am our meetings start. We usually have five to six hours of meetings per day. There’s a huge amount of mental application required, whereas the physical side of things is very similar to rugby. We have a gym session halfway through the day and then a field session to work on our plays. After that we’re expected to stay on and continue studying the play book. Some nights I don’t leave until after 9pm. On the weekends we have a team run on the Saturday for a few hours and then before each home game we’re expected to be in the team hotel the night before for more meetings. I think there’s this perception that the NFL is this dreamy lifestyle, but in reality the amount of effort and hard work required by players and coaches is extraordinary.

This season is gold dust for me. To have a whole year to learn the game, and understand how the NFL works is a massive opportunity. I have an extremely special deal and my goal is to learn as much as I can, improving day in, day out. I want to improve so much that in 12 months’ time I can consider myself an NFL-standard player. I want to play consistently and win things, and my ultimate goal is to be in a position to win the Super Bowl.

I’m loving the lifestyle. Georgia is famous for its southern hospitality, everyone is friendly and they welcome you with open arms. As soon as anyone finds out you’re a Falcons player you get people coming up to you in the streets to say hello and wish you all the best. The weather is beautiful, for the past few months we’ve had an average temperature of 30 degrees. Plus as a member of the practice squad you get to travel with the team on all of our away trips, which has been an awesome experience and a great opportunity to visit some of the best cities in the US.

Keep up to date with Alex’s journey by following him on Twitter: @AlexShaggyGray