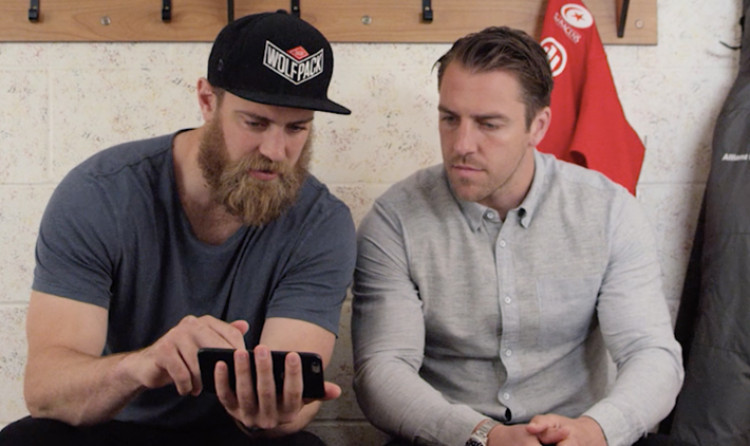 In 2014, Saracens pair Chris Wyles and Alistair Hargreaves launched Wolfpack, their very own craft lager. Five years on and business is booming, we caught up with Chris to find out more.

Where did the initial idea and inspiration come from?

Alistair and I spent a lot of time discussing life after rugby and realised that we shared the same values and interests. After bouncing a few ideas around we eventually fixed on the thought that we love having a beer. Both of us had previously gone down different avenues when it came to work experience. I was exploring the idea of an MBA but I didn’t want to delve into the books again. I wanted to learn by doing. We felt that starting a business was a great way to learn.

Was ruling out other things first almost a necessary process?

Were you always tuned into preparing for life after rugby?

Huge credit has to go to Saracens and the RPA for making us aware of the pitfalls of retirement and the positive steps you can take to make yourself more employable and a more well-rounded person. Even from a young age I was very aware of the fact that what I was doing has a very short shelf life and more importantly could end in one tackle.

Once you’d decided which way you wanted to go, how did you get started?

It was daunting but once we made the decision to go for it, our main goal was to learn. We knew we would make mistakes but that was part of the excitement and the challenge. We were fortunate as rugby players to have another income stream as opposed to people who have to leave their jobs or re-mortgage their homes to launch a start-up. We could jump into things without too many constraints.

How do you balance the business with your playing career?

It’s pretty challenging. Since Alistair retired he’s put a lot of work in. We’ve spent a lot of time making sure we understand each other. You have to lay everything on the table. We both have young families and balancing the time pressure with rugby and the business is difficult, but we both see it as a short-term sacrifice for what could be a massive long-term gain.

Where do you see the business going?

Like all rugby players we’re massively ambitious and motivated. We’re prepared to work hard to make sure this is a success. We’re just in the process of opening up a taproom that will take the business to another level.

How did you go about creating the beer itself?

The craft beer industry is really exciting and is growing massively in the UK. We threw ourselves into it and did a lot of research. We’re aware of the fact we’re new and we’re very fresh so we wanted to speak to people who had the experience and the knowledge. We just got out there to meet as many people as possible. And we tried as many beers as possible to really refine the product we wanted to come out with. It’s been a really fun process.

What advice would you give to other players who might want to set up their own business?

When you go into business it’s a sacrifice. You’ve got to be willing to put in a lot of hours. In terms of setting up a business, I’d say finding the right partner has been a huge thing for us both. I know for a fact I would not have been able to do this without Alistair and hopefully he would say the same about me. I feel quite strongly that trying to do something on your own, particularly while trying to hold down a rugby career, is very difficult.

If you are looking to further your development away from the rugby pitch please speak to your RPA Development Manager.