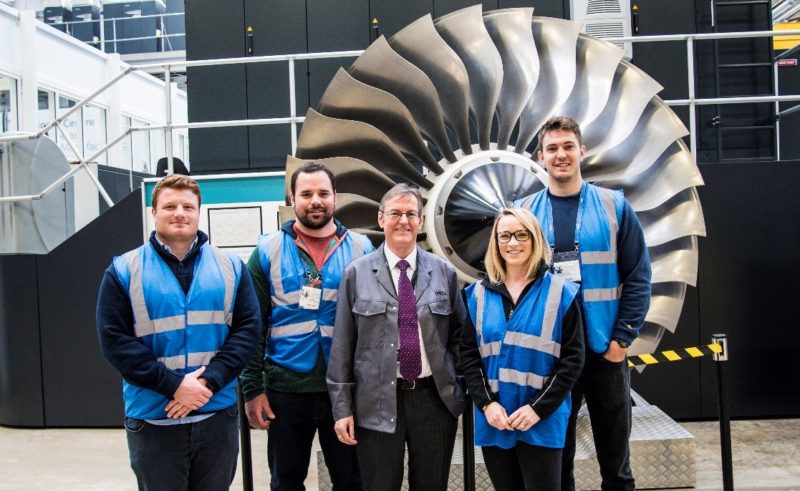 A trio of Leicester Tigers players are already tackling one of the biggest challenges of their professional careers – what to do once they hang up the boots.

It is a decision that all professional sportsmen and women face and Tigers’ players Chris Baumann, Kyle Traynor and Joe Maksymiw are no different. But preparing for the future, especially in a sport as physical as rugby when career ending injuries can strike at any time, is vital and a key role of the Rugby Players Association (RPA). The RPA is keen for players to weigh up all of their options and Baumann, Traynor and Maksymiw were given an insight into the world of engineering and the career possibilities at the Manufacturing Technology Centre (MTC) in Coventry. Lynsey Hyslop, Senior Personal Development Manager at the RPA, who works with both Leicester Tigers and Northampton Saints, was keen to bring the players to the MTC following similar industry insights. The insights aim to enable players to make considered career choices and to make the transition from professional rugby as smooth as possible

Rhys Davies, learning and development manager at the MTC, who is also an elite rugby referee, co-ordinated the visit. “Lynsey was aware of the work we do and was keen to bring a group of players here,” said Davies. “She felt that a day with MTC would enable the players to gain further understanding of roles within manufacturing, engineering and technology as well as the variety of projects that we cover.” The fact-finding visit included a tour of the MTC’s state-of-the-art facility, including the National Centre for Additive Manufacturing, by chief executive Dr Clive Hickman, who also gave an overview of his manufacturing career. Hickman explained the research work of the MTC and how it was developing a range of technological innovations that will be used in a range of industrial sectors. The MTC is at the forefront in digital manufacturing, which covers a range if technologies such as robotics, virtual reality, additive manufacturing (3D printing), electronics and big data.

Hickman said: “The players had no idea what modern high value manufacturing entailed before coming to MTC. During the tour it was apparent they thought they had been to a James Bond film set such was the range of technology we have here. “Aside from talking about an engineering career, it was much wider than that including the support services such finance, business development, training and development, HR, commercial management and so on. “They were really engaged in what we do here and with plenty to think about. It is great to support the RPA in their work, and the players directly with this initiative, and I look forward to welcoming more players to the MTC in the future.” Hyslop, who is working on bringing another group of players to the MTC, said: “We really appreciated the tour, especially the guys who were just blown away by it all. “It was a really enjoyable, informative and inspiring morning which not only gave the players an insight in to MTC’s projects, employees and technology, it also got them outside of the ‘rugby bubble’, experiencing life in a totally different environment to that which they are used to.”