Five shortlisted for RPA Players' Player of the Year 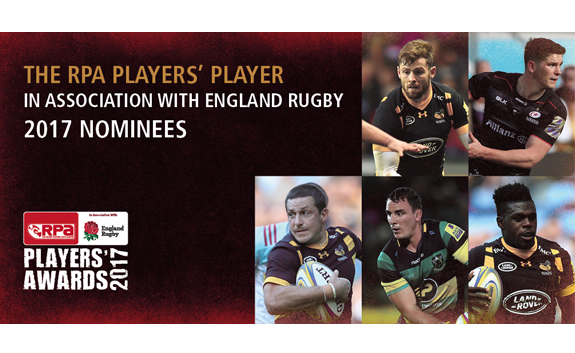 Five players have today been shortlisted for the RPA Players' Player of the Year in association with England Rugby.

This prestigious award is voted for by all Aviva Premiership players and recognises the outstanding talent in English rugby. The winner will be announced at the RPA Players' Awards 2017 on Wednesday 10th May in London. The five nominees include Wasps trio Elliot Daly, Jimmy Gopperth and Christian Wade, Saracens fly-half Owen Farrell, and Northampton Saints forward Louis Picamoles. This year's nomination caps off an exceptional season for the dynamic Wasps and England centre, Elliot Daly. Elliot has featured in 13 Aviva Premiership matches, scoring four tries, and proving a significant factor in Wasps' charge to the play-offs. The 24-year-old was also recently included in the British & Irish Lions squad for this summer's tour to New Zealand. Saracens and England play-maker Owen Farrell is this year's second nominee. The prolific fly-half has been in impressive form for club and country this season, and continues to lead Sarries' push for domestic and European silverware. Owen is also nominated for the England Player of the Year award. Our third nominee is Wasps sharpshooter Jimmy Gopperth. The 33-year-old has been in career best form throughout the 2016/17 season and currently leads the Aviva Premiership's points scoring tally with 256. With 20 matches under his belt and nine tries to his name, Jimmy has helped to propel Wasps to the top of the Aviva Premiership table. Northampton Saints' powerhouse Louis Picamoles is the penultimate nominee. The French international has quickly settled into life in the Aviva Premiership and has made a huge impact in his first season in Saints colours, with a competition high 40 offloads. Wasps speedster Christian Wade completes the list of nominees following a superb season for the competition leaders. The flying winger leads the Aviva Premiership with 16 tries from 20 matches, beating 77 defenders along the way. Christian was named the RPA Players' Player and Young Player in 2013.

Quotes from the RPA Players' Player of the Year 2017 nominees:

Elliot Daly said: “I’m hugely humbled to be nominated for an award which recognises the outstanding talent we have in English rugby. The quality of players in the Premiership is extremely high so to be chosen alongside so many outstanding players is a surreal feeling.”

Owen Farrell said: “It’s very pleasing to be nominated for such a prestigious and well respected award. The Premiership is such a competitive league, so to be nominated as one of the five best players is an incredible feeling and one which I’m very proud of. As always, a big thanks to my peers for the kind recognition.”

Jimmy Gopperth said: “To be nominated for such a huge prize by the guys you play with is the ultimate reward. I feel very humbled and blown away by their support. I must thank my Wasps teammates for the awesome work we have all put in this season. I’m sure I will look back on this at the end of my career and be very proud.”

Louis Picamoles said: “It’s a very special honour to be nominated for this award, especially as it’s my first season in the Premiership. I have really enjoyed my year so far playing for Northampton and I look forward to many more great games ahead.”

Christian Wade said: “It’s an absolute privilege to be nominated for this very special award. I have had loads of injuries over the last few years but I feel I am getting my confidence back and playing some great rugby. It’s an honour to be nominated by my peers and hopefully I can continue my form heading into the final matches.”

For a full list of all our nominees for the RPA Players' Awards 2017 in association with England Rugby please click here. The winners will be announced on Wednesday 10 May 2017, at Battersea Evolution in London. To book your place please contact Martin Olima on 020 3053 6670 or molima@theRPA.co.uk