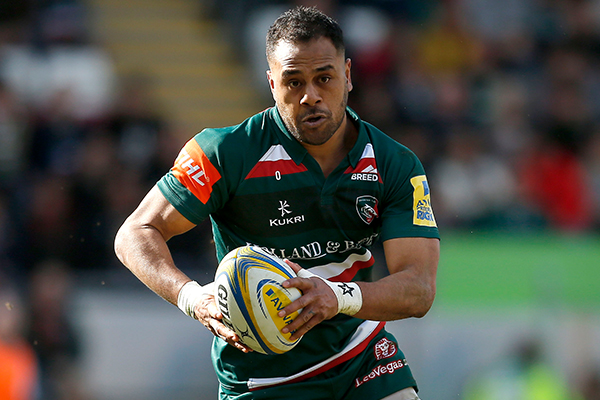 Leicester Tigers full-back Telusa Veainu has capped off an extraordinary season by being named the RPA Players’ Player of the Year at the 20th RPA Players’ Awards in association with England Rugby.

The prolific ball-runner polled the most number of votes from his fellow professionals to claim the most prestigious award in the English game at a glittering awards ceremony in central London.   The 27-year-old, who has been capped nine times by Tonga, has been in sensational form in 2017/18, scoring seven tries for Leicester and proving an absolute handful for opposition defences across the Aviva Premiership, beating more than 85 defenders, and making over 1,500 metres.   Veainu said: “It’s an enormous privilege to win this award. I am very surprised but also very thankful for the awesome support shown by my peers. I must give credit to my Leicester teammates and coaching staff. Rugby is obviously a team sport and while these individual awards are very humbling, it takes 14 other guys to do their jobs on the pitch to allow me to play my best. Without their support I wouldn’t be where I am today.”   Other notable award winners on the night included Marcus Smith as the Sanlam Young Player of the Year, Mako Vunipola as the England Men's Player of the Year in association with All Sport Insurance, Danielle Waterman as the O2 England Women's Player of the Year, and 2003 World Cup-winning coach Sir Clive Woodward was named the latest inductee into the RPA Hall of Fame in association with Rise.

The RPA Players’ Player of the Year in association with England Rugby Winner: Telusa Veainu - Leicester Tigers “It’s an enormous privilege to win this award. I am very surprised but also very thankful for the awesome support shown by my peers. I must give credit to my Leicester teammates and coaching staff. Rugby is obviously a team sport and while these individual awards are very humbling, it takes 14 other guys to do their jobs on the pitch to allow me to play my best. Without their support I wouldn’t be where I am today.”

The Sanlam Young Player of the Year  Winner: Marcus Smith - Harlequins “To receive this award, voted by the players means a lot to me. I have enjoyed the year tremendously and would like to thank everyone at Harlequins and England who have given me such great support. I look forward to next season in anticipation of some more great experiences and some big wins for Quins.”

The England Men's Player of the Year in association with All Sport Insurance Winner: Mako Vunipola “I’m so proud to be recognised with this award and thankful for the support shown by my teammates. I cherish every moment I get to represent my country and for me there is no prouder moment than taking the pitch in an England shirt with my mates.”

The O2 England Women's Player of the Year Winner: Danielle Waterman “In my opinion, being nominated by your team mates for an award like this, is one of the biggest accolades you can ever receive. I am truly honoured!”

The England Men's Sevens Player of the Year in association with Argentex Winner: Ruaridh McConnochie “I love playing around the world with these guys and have done for the past three seasons. It’s a massive thing for me to recognised by my mates for something like this and I’m really honoured to receive the award.”

The England Women's Sevens Player of the Year Winner: Alex Matthews “I’m extremely surprised, yet grateful to be given this award by my teammates. My reintroduction into the sevens game has been a pretty special season. I never thought I’d achieve the things I have, and I can only thank the players and staff around me, it’s down to the environment and culture we’ve produced.”

The Greene King IPA Championship Player of the Year Winner: Michael Le Bourgeois - Bedford Blues “I am absolutely elated to have won this award, and against two other outstanding nominees is truly amazing, it is such an honour.”

The RPA Personal Development Programme Award in association with Clarke Willmott Winner: Chris Wyles “It's feels fantastic to have won this award. We've worked very hard to create what we think is an exciting business and this recognition is the icing on the cake! I'd like to thank the RPA and Saracens for their continued support.”

The RPA Special Merit Award Winner: Ian Robertson “One good commentary for the BBC in 46 years and lo and behold I receive the 2018 RPA Special Merit Award. In brief I feel honoured, humbled, surprised beyond belief, thrilled and very grateful. Thank you Jonny for kicking that drop goal in 2003, and thank you to the RPA for making an old man very happy.”

The RPA Blyth Spirit Award in association with Towergate Insurance Winners: Doddie Weir & Ed Jackson Doddie: “I am honoured to receive the RPA Blyth Spirit Award. Andy Blyth was a teammate at Newcastle Falcons and the way he has tackled life after his devastating injury is inspiring. I am joining a list of remarkable people who can teach us all a thing or two about how to face adversity. I have been overwhelmed by the rugby community’s amazing response to my diagnosis and the launch of My Name’5 Doddie Foundation and feel fortunate to have had so much enjoyment from the game.”     Ed: “The support I have received from the rugby community as a whole throughout this journey has been truly humbling. I want to dedicate this award to all of you that have made such a big difference to me and my family over the last twelve months. It’s not what I have done but what everyone has done for me that shows the true spirit of rugby. Thank you.”

The RPA Hall of Fame 2018 in association with Rise Winner: Sir Clive Woodward “It is a great honour to be inducted into the RPA Hall of Fame, alongside some wonderful players and personalities who have contributed so much to the game. I still consider myself a player first and a coach second. It was my experiences as a player that have shaped my approach to coaching. I still view the game through a player’s eyes and I am sure that is why I love the game now as much as ever. I would like to thank Damian and the RPA for their tireless support to players and for this great honour. I would also like to thank all those team mates, players, coaches, colleagues and friends who have made rugby so special for me.”